The Count Me In! Consortium supports the voices and activism of women, girls, and trans and gender non-binary people who are often most marginalised in their communities.

Among the most silenced voices are those of sex workers.

The Counting Sex Workers In! campaign puts a spotlight on sex worker-led advocacy and highlights the voices and perspectives of sex workers of all genders in order to advance understanding that sex workers’ rights are human rights and a feminist issue. The campaign will call attention to the frequent experiences of discrimination, harassment and violence experienced by sex workers. It will challenge the ways that sex work is most often viewed through a narrow lens of moral judgment, and instead highlight bodily integrity and workers’ rights. The Counting Sex Workers In! campaign ran from October 26 to November 10, 2020.

It is time that women’s rights and human rights organisations and donors recognise and promote sex workers’ bodily autonomy, acknowledge their labour rights as workers, and highlight their rights to be free from discrimination and violence – by both state and non-state actors.

This two-week campaign is designed to start conversations, offer resources and encourage solidarity for sex workers and sex workers' rights. Please follow this page for resources and CREA's & other CMI members' social media platforms to join in the campaign!

As the UN Women-led campaign “Generation Equality: Realizing women’s rights for an equal future” continues to move forward on an adjusted timeline, it demands equal pay, an end to sexual harassment and all forms of violence against women and girls, health-care services that respond to women’s needs, and their equal participation in political life and decision-making in all areas of life. All of these demands must encompass sex workers and sex worker advocates must be part of the process. With the deep and ongoing impact of COVID-19, this session celebrates achievements, shares good practices and promising innovations and discusses key challenges focusing on participation, representation and voice of sex workers and on ensuring sex workers’ rights to bodily autonomy.

Count Me In! has developed a series of fact sheets that highlight commonplace challenges that sex workers face - e.g. in the law, in the workplace, as targets of violence, etc. The fact sheets also lay out how allies can take action to support sex workers’ rights. 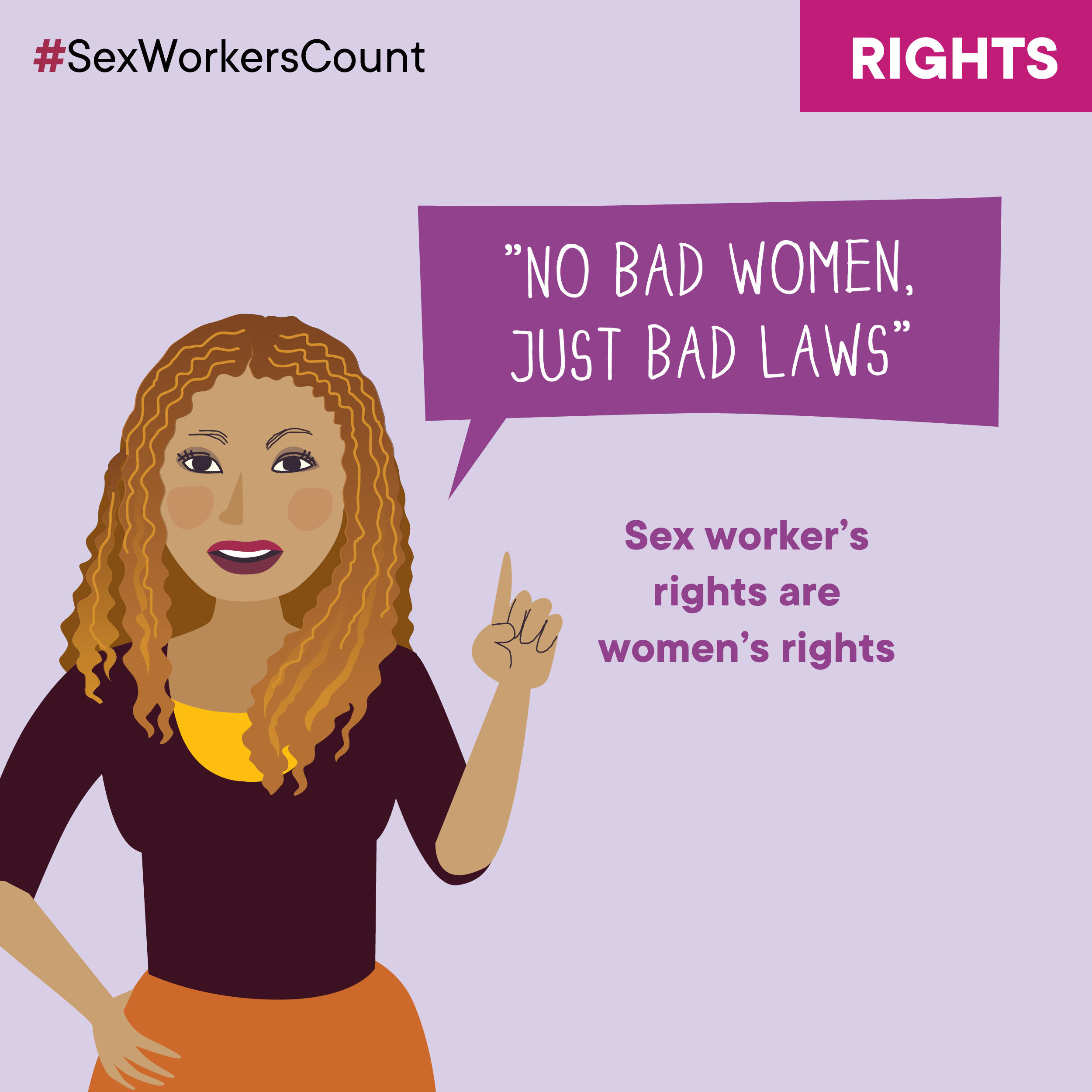 Sex workers' rights are central to the fight for women's rights and for achieving gender equality. Yet, there continues to be disagreement about how best to ensure that women in the sex industry are free from violence and discrimination. 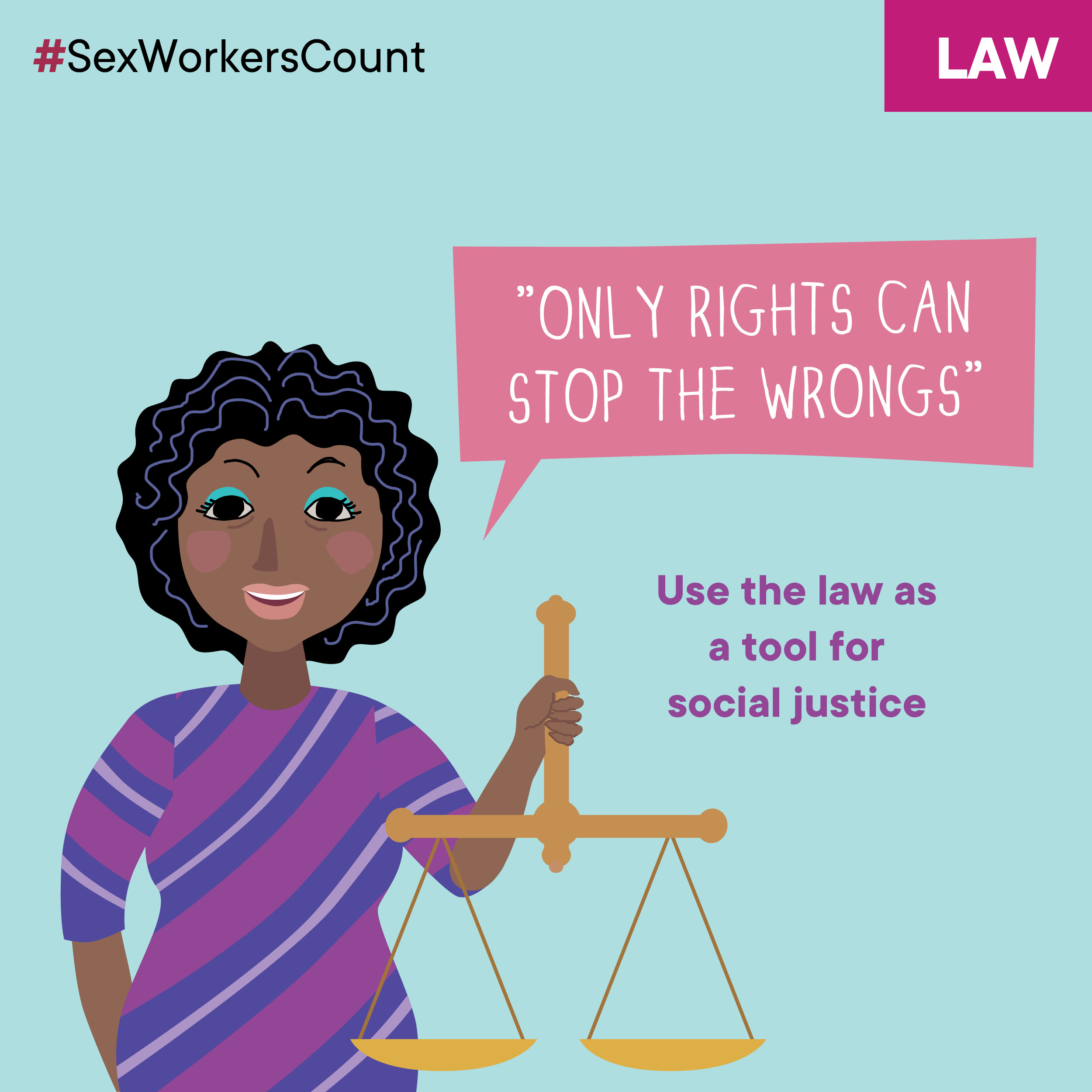 There are a variety of legal models to regulate sex work around the world. A few countries have laws that respect the rights of sex workers, others have various levels of punitative, oppressive laws with devasting consequences for sex workers, their families and society at large. Unfortunately, the latter characterises the approach of most countries in the world. 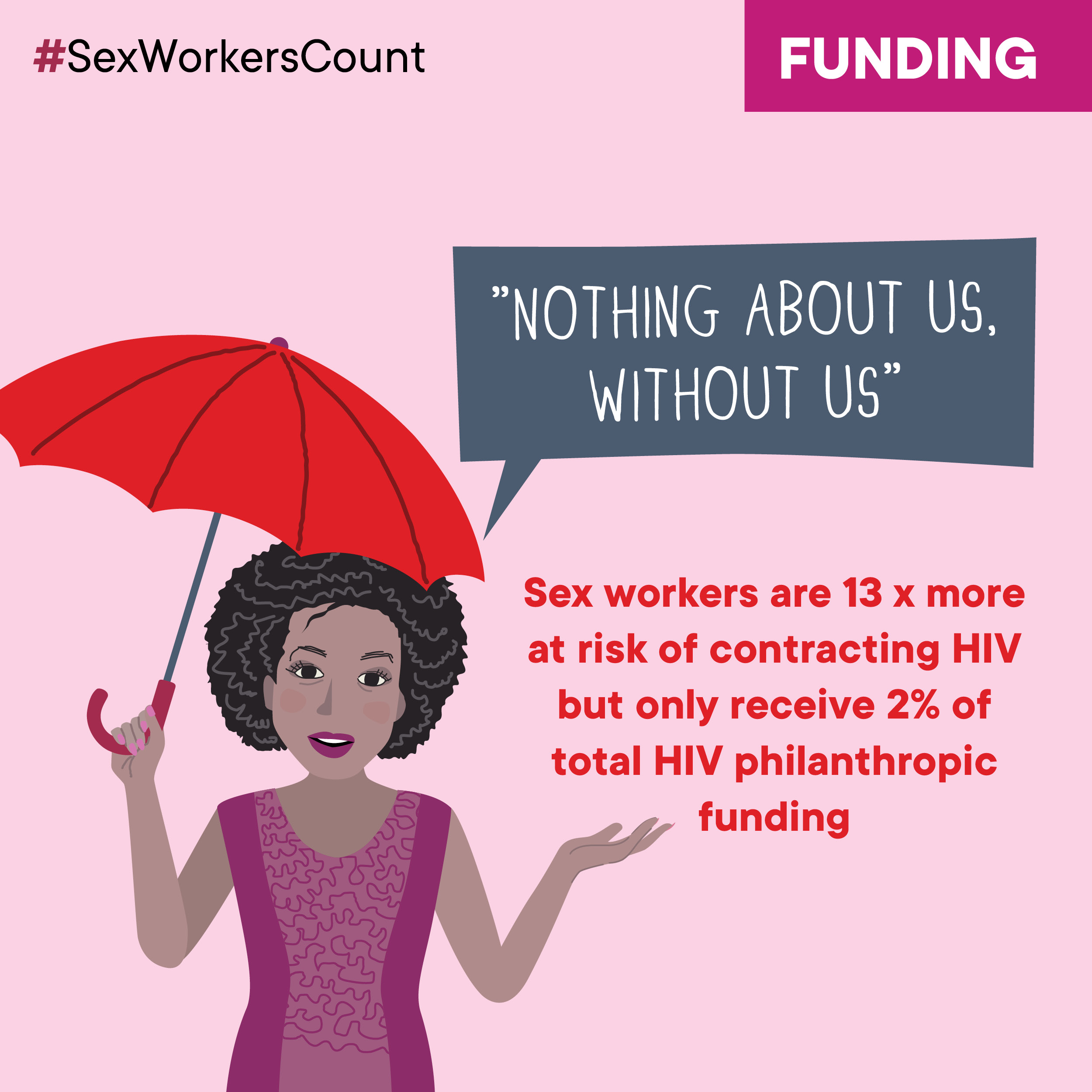 Also in: Arabic | French | Hindi | Russian | Spanish
Sex workers in communities around the world are organising to end exploitation and violence, to access appropriate and respectful health care, and to build movements for lasting change. However, as a result of criminalisation, discrimination and stigma, few institutions are willing to fund the fight for sex workers' rights. 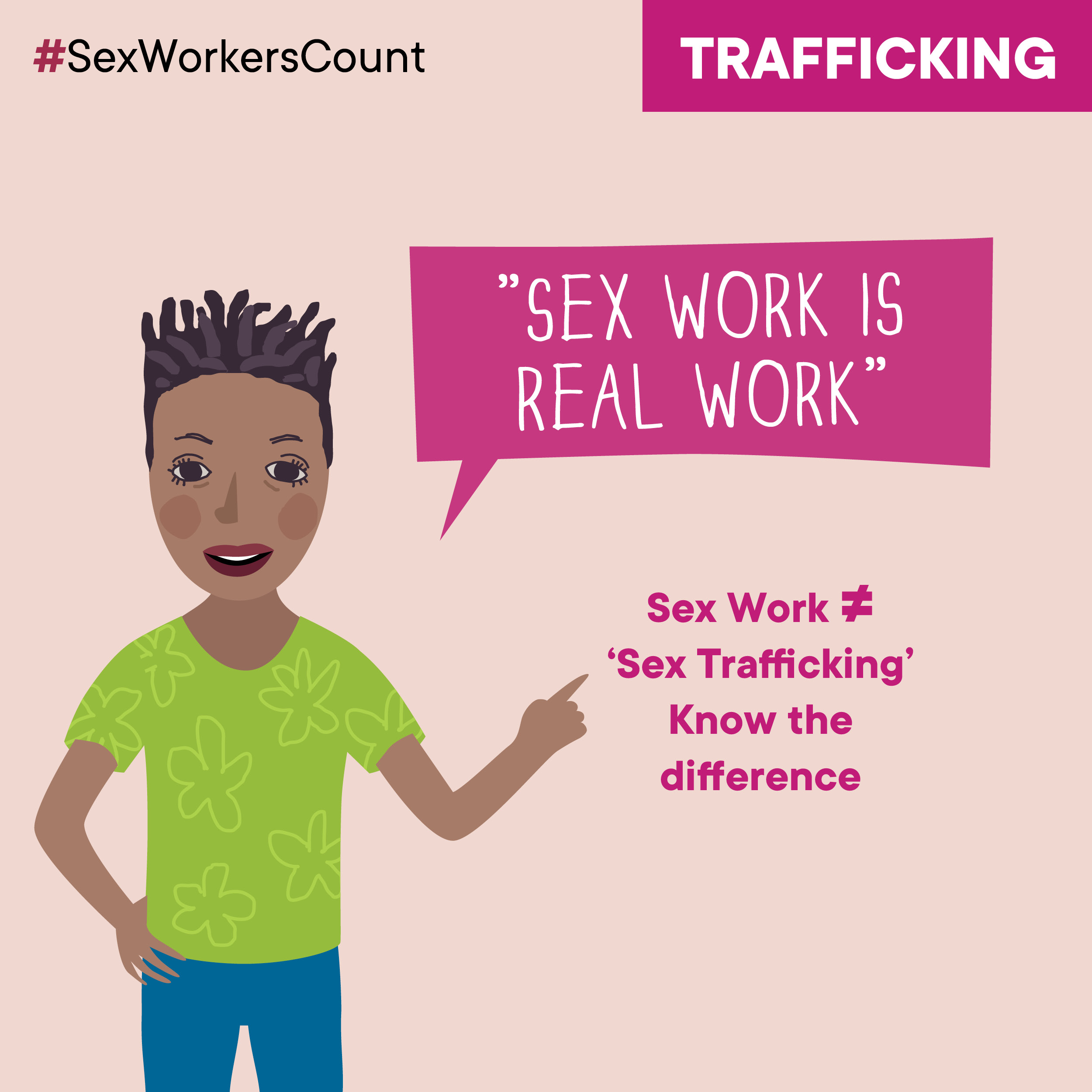 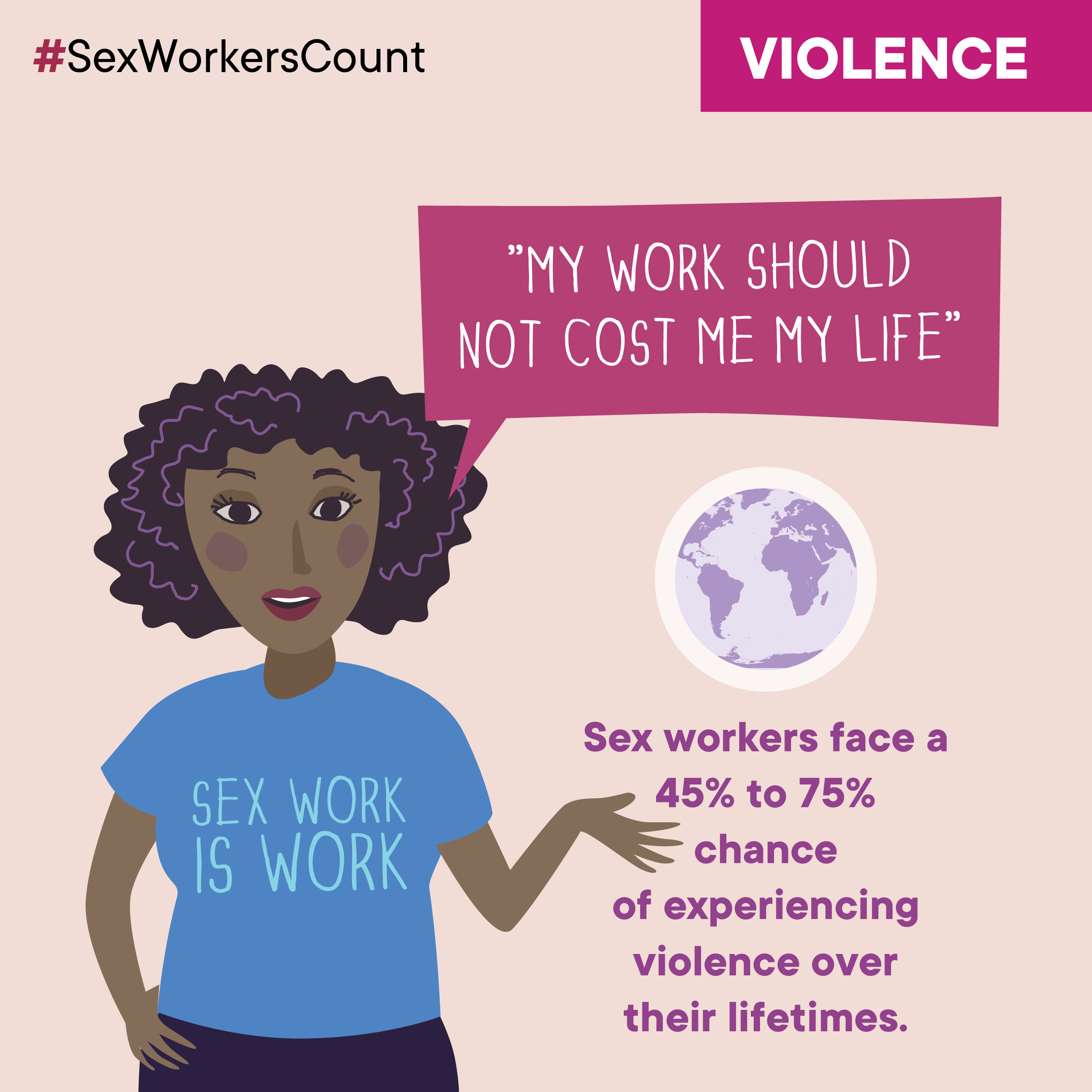 To a large extent, the violence in the lives of sex workers is created by the conditions of criminalisation. Sex work is not inherently violent but discrimination and stigma against sex workers generate violence and limits sex workers' access to justice. 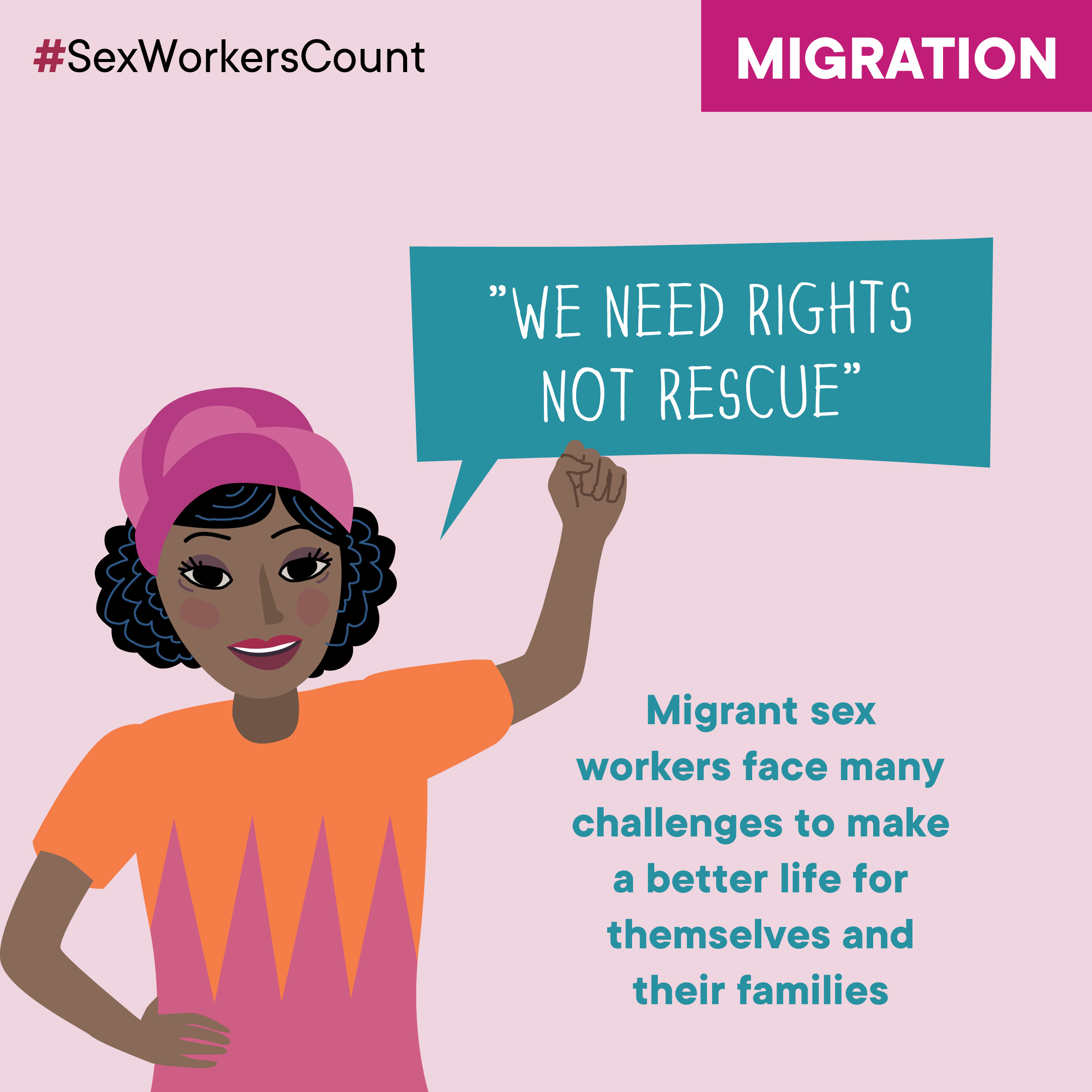 Migration describes the process in which individuals or groups of people leave their place of usual residence. People migrate for a range of reasons and almost all states in the world are countries of origin, transit or destination for migrants. 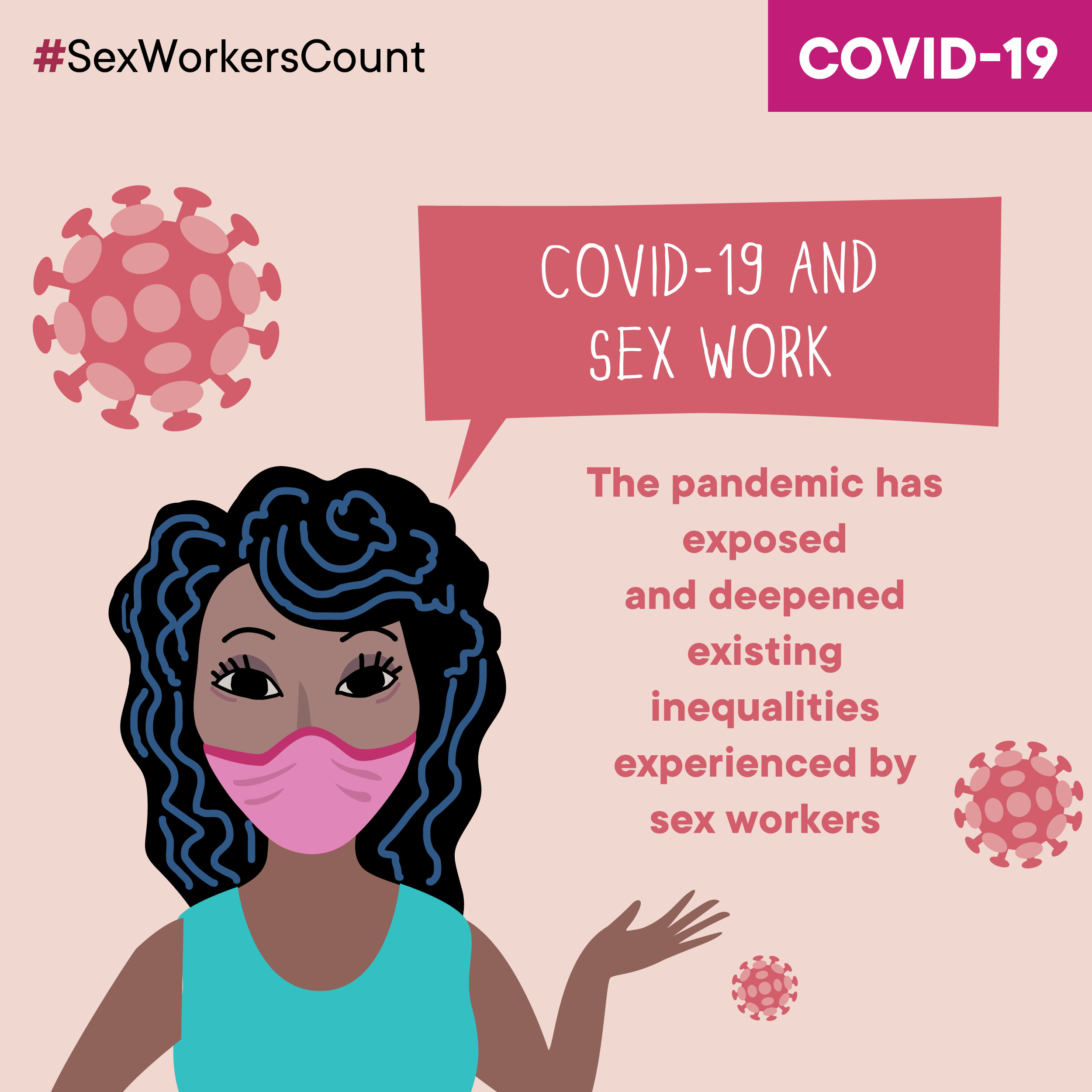 The COVID-19 pandemic has exposed and deepened existing inequalities experienced by sex workers, Under COVID-19 these challenges have become extreme and have driven many already-precarious sex workers into crisis, destitution and even death. 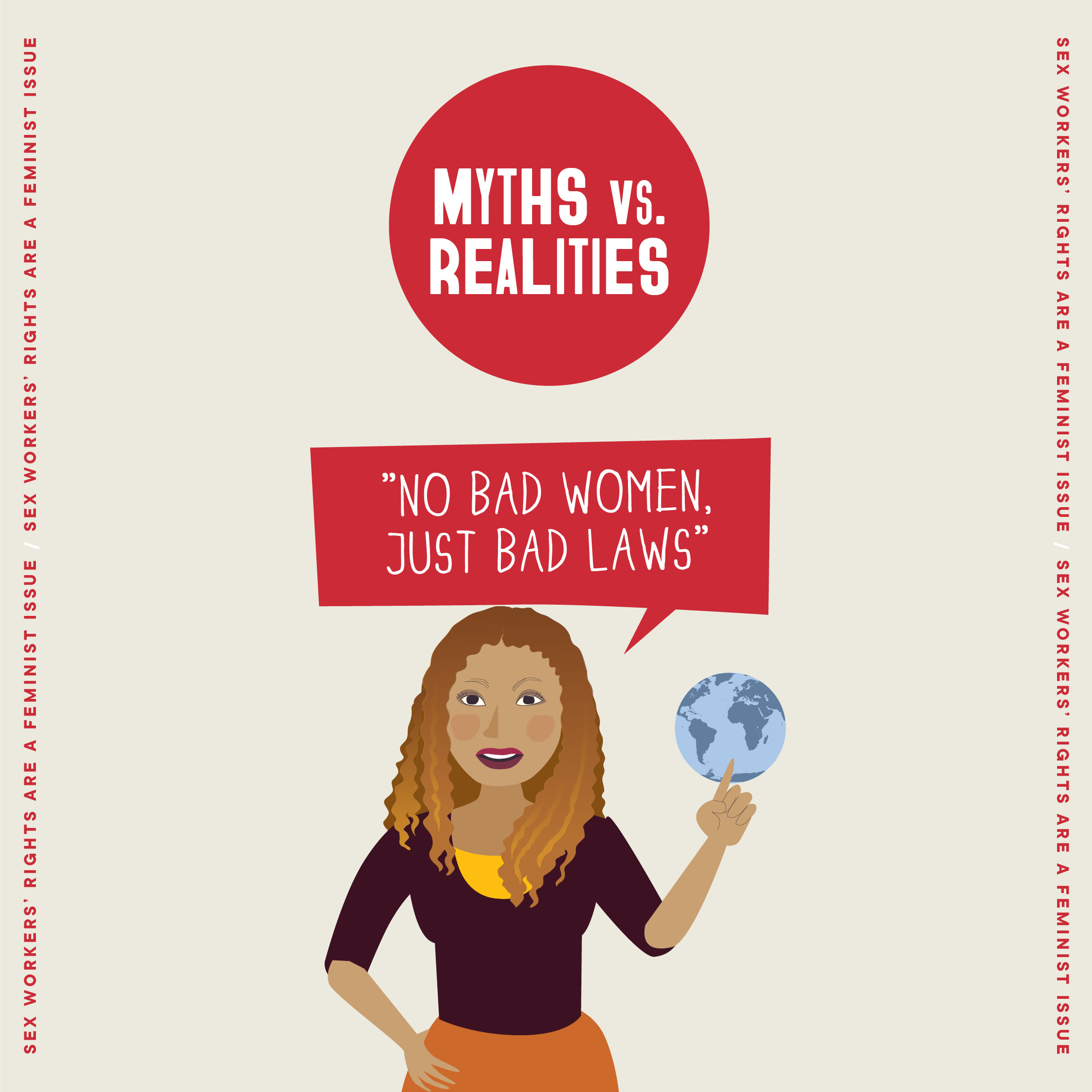 There are a lot of misconceptions around sex work - read more about what those myths are, and how to bust them! 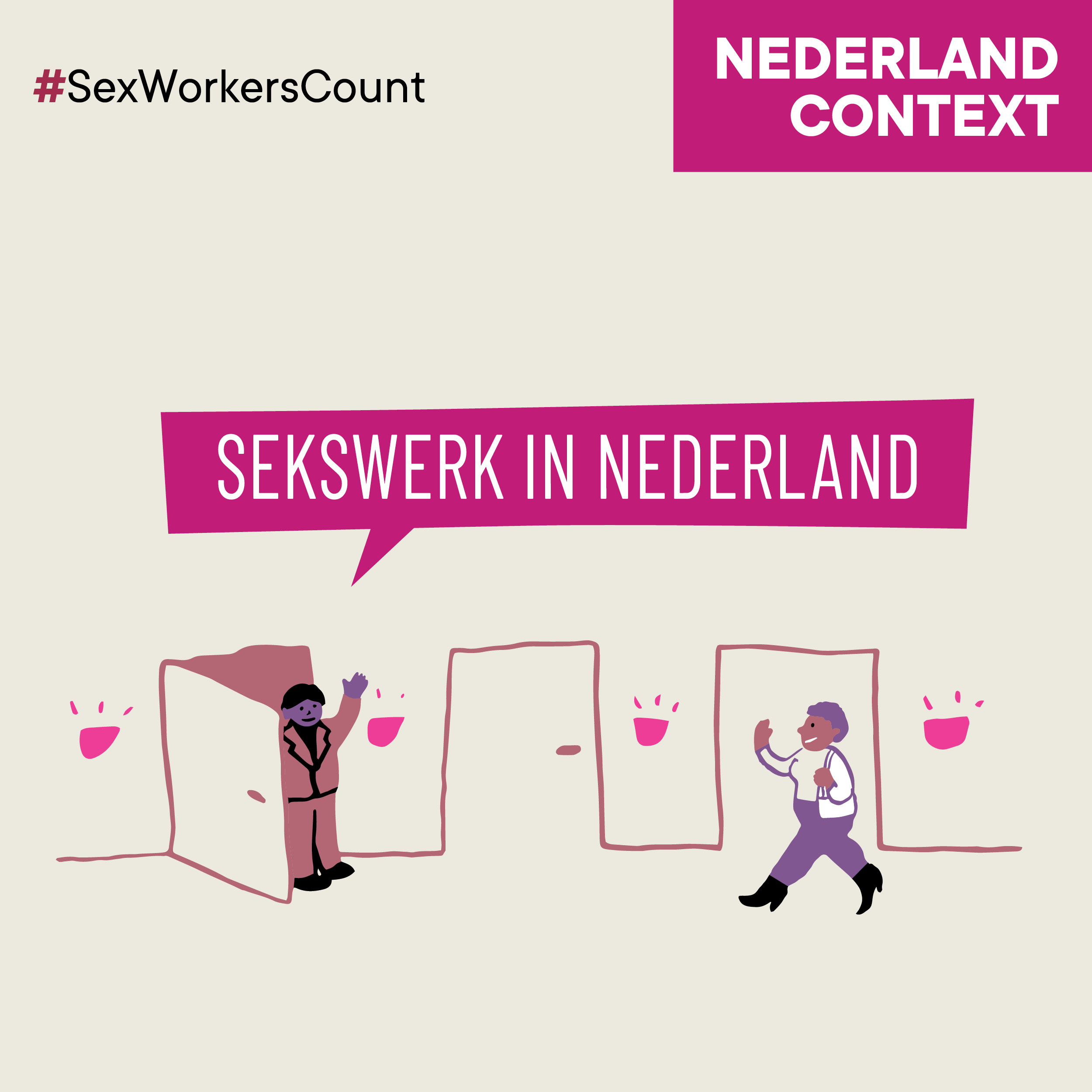 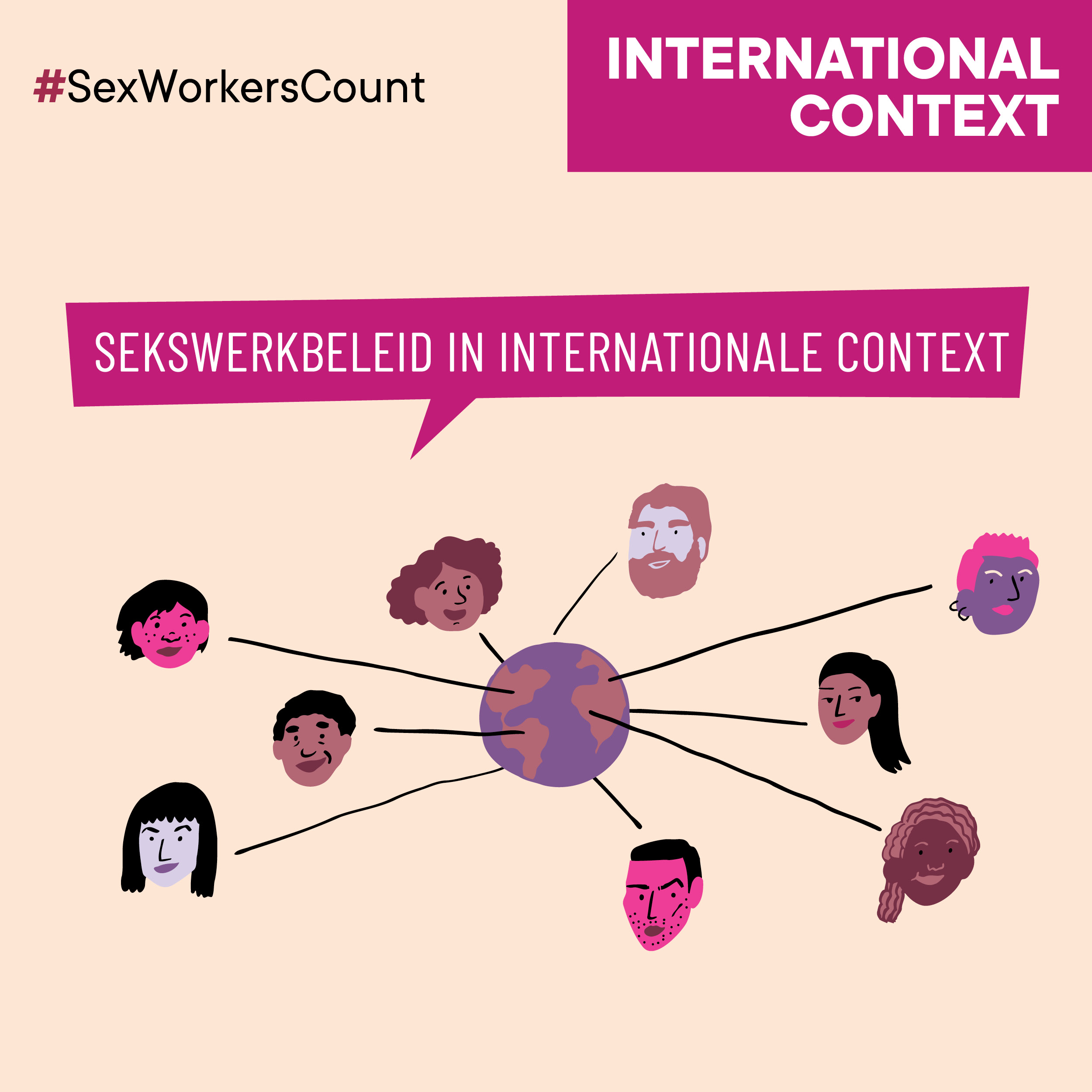 Count Me In! Realising women's rights