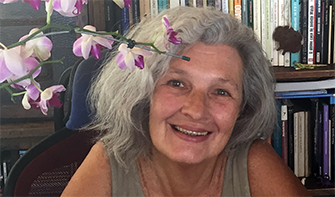 “Participatory grantmaking gives a voice to people who are committed to women’s groups”, says Alejandra Sardá- Chandiramani. She belonged to the first Community Committee (COM COM) that judged and made decisions about grant applications in 2021. “The fact that Mama Cash shared that responsibility with us testifies to an enormous amount of trust.”

Alejandra (61 years old) is Argentinian and has built a long career as an activist. She came out during the difficult years of military dictatorship in her country (mid-1970s to early 1980s), and became an activist in her late 20s in a group championing lesbian rights after Argentina had passed from the clutches of the dictators to the neoliberalists.

“In those years, I also became a human rights activist. A few years later, I was invited by Mama Cash to lead a workshop on the importance of trans rights within feminist movements.” From 2009 to 2013, Alejandra worked for Mama Cash as Senior Programme Officer Women’s Funds.

“Mama Cash is always prepared to innovate and break new ground. Their involvement in women’s groups and women’s movements, as well as the desire to understand and be of service to them, is not unique, but it is remarkable. They are not afraid to explore. Let’s do it, let’s find out how it works and do it well. That is typical Mama Cash. It shows guts and they are also demonstrating that by opting for participatory grantmaking.”

How did the COM COM work?

“A lot was done to ensure the work of our committee was prepared well. Our task was, of course, complicated. Each of the members started reading 20 applications. Those were applications about topics that were familiar to each of us. In total, there were 120 applications, a large number of which were in the area of sexual rights.

We ultimately arrived at 15 groups that received a grant. That was an exhaustive process. It was really important to me to really listen to my colleagues to hear what they value. It really hurts if you see a good proposal and have to say ‘no’ at a given moment. We also had to strike a good balance between all continents.”

Which project was particularly close to your heart?

“A group that advocated for, among other things, housing trans people. I presented that proposal within the COM COM and what they do is really fantastic. The COM COM unanimously
decided to give the group money. I cried when I read the proposal, when I presented it and when the money was awarded.

I know from my own experience how important it is for such a group to receive funding. Ten or twenty thousand euros already makes an enormous difference.”

And what’s the plan for the coming years?

“The COM COM was composed with great care. There were differences of opinion, of course, but each member was also able to listen to the others and different opinions were respected. What helped us was that the ultimate vote about the awarding of the grants was by secret ballot. That was a good choice by Mama Cash.

Participatory grantmaking was a major step. These decisions are now taken by people who understand the local situation, who are active in the movements themselves and know where the money can best be spent. The commitment of the COM COM members was terrific.”

Read more about the COM COM