Skip to the page content
Donate now
Search
To the homepage
Mama Cash will use your name and e-mail address to be in touch with you and to provide updates. You can change your mind at any time by clicking the unsubscribe link in the footer of any mail or by contacting us at shesupports@mamacash.org. By clicking the button above you agree that we may process your name and e-mail address in accordance to our Privacy Statement.
Back to overview
June 15, 2022 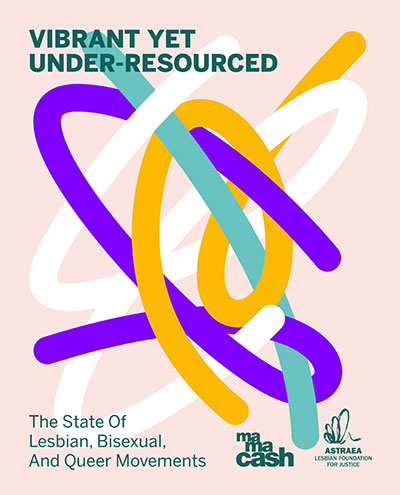 In June 2020, Mama Cash and the Astraea Lesbian Foundation for Justice launched the report Vibrant Yet Under-Resourced: The State of Lesbian, Bisexual, and Queer Movements. Vibrant Yet Under-Resourced focuses in on the lack of funding available to growing LBQ movements worldwide and makes a powerful case for why increased and more effective funding is urgently needed.

In addition to the full report, we have launched a series of short regional briefs that take a closer look at regional data not included in the full report. These briefs confirm that LBQ groups and movements are present and growing worldwide, and also that the lack of funding, extremely limited budgets, and reliance on unpaid labour are a reality in every region of the world.

We invite you to read the report and the briefs and hope that they will support your work. See links to the full report and the regional briefs at the bottom of this post.

Key findings from the research include:

LBQ activists’ intersectional organising across movements is critical to advancing human rights and social change globally. Their efforts are integral to creating the fabric of justice and equity, yet resourcing for LBQ movements’ work is inadequate and has not kept pace with the innovative ways in which they are organising.

Even within LGBTQI funding - which itself represents less than 1% of all foundation and government funding - only 5% can be identified specifically directed to lesbian, bisexual, and queer (LBQ) issues and communities. Particularly as the world confronts an impending economic recession in the wake of COVID-19, it is imperative that philanthropy supports LBQ movements who are among the leaders of feminist, grassroots, advocacy, organizing, and community care efforts so critical to responding to the pandemic, but are faced with major financial challenges themselves.

Speaking to the urgency of funding LBQ movements, Chantelle de Nobrega, Programme Officer for Body at Mama Cash says, “LBQ activists are changing the world. The work they do confronts the realities of violence and exclusion experienced by LBQ people, in social attitudes, in institutions, in laws and policies, in families and relationships. Moreover, their activism often sits at the intersections of sexuality, disability rights, economic and environmental justice, Indigenous rights, black consciousness and anti-racism and more, and donors need to look beyond the limiting borders of funding programmes to meet the needs and priorities of LBQ groups and fund their innovative work. If we want to see LBQ groups not only hold the line against the rising tide of anti-rights politics, but also advance a radical politics of liberation, then we need to give them more to work with.”

Despite a dramatic lack of resourcing, vibrant and visionary LBQ groups are emerging and growing worldwide to confront hostile social and political environments and to advocate for freedom and justice. Indeed, the research shows a surge in organising in the past two decades. Nine out of ten groups (89%) in the survey were founded since 2000, and over half (61%) were founded in the past ten years.

In Vibrant Yet Under-Resourced, we present findings from surveys conducted in 2018 with 67 donors, including public and private foundations, and 378 LBQ groups from all regions of the world, as well as follow-up interviews resulting in four case studies of LBQ groups.

The report serves to fill many of the previous knowledge gaps around the funding needs of global LBQ movements, and urges the philanthropy community to increase funding for LBQ movements and invest in them for the long haul. Astraea and Mama Cash call on foundations and government funders alike to provide new infusions of quality funding to LBQ movements at this most critical time.