Skip to the page content
Donate now
Search
To the homepage
Mama Cash will use your name and e-mail address to be in touch with you and to provide updates. You can change your mind at any time by clicking the unsubscribe link in the footer of any mail or by contacting us at shesupports@mamacash.org. By clicking the button above you agree that we may process your name and e-mail address in accordance to our Privacy Statement.
Back to overview
July 8, 2020

From catcalling on the streets to online harassment during COVID-19 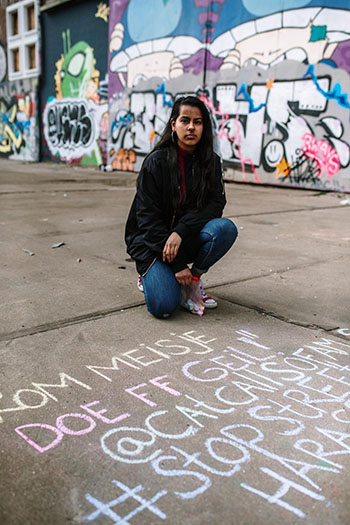 My name is Ambrien Rukhsar Moeniralam. I’m 18 years old, and studying media and editing at the Regional Education Centre (ROC) in Amsterdam. I’ve been an intern with Mama Cash’s communications team since February 2020.

I couldn’t have been more excited last year when Mama Cash asked if I wanted to be featured in their #MyBodyIsMine campaign, with other bad-ass activists like Daantje Bons, Nidhi Goyal and Alok Vaid-Menon. I have always been a fan of Mama Cash's work, and it’s an amazing feeling to be acknowledged by them and to know they support me. In fact, the reason why Mama Cash wanted to collaborate with me and why I am interning here right now is because of my activism: I am the founder of @catcallsofams on Instagram.

With this platform, I am trying to raise awareness about gender-based harassment, to de-normalise catcalling and to give people a space to share their stories. Catcalling is a vulgar whistle or shout – for example “hey hot stuff” – usually directed at women. People who have experienced harassment in Amsterdam submit their stories to @catcallsofams. We then go to the place where the incident took place, and write the specific catcall on the pavement in chalk. We then add the tags #stopstreetharassment and @catcallsofams so people know where to find us. 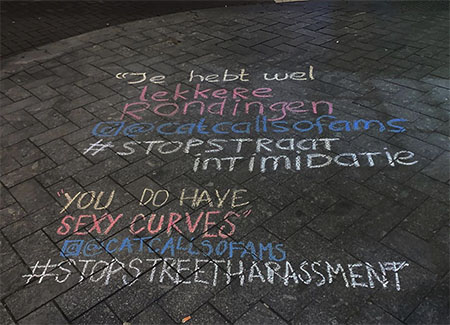 I have noticed that both online and offline harassment have intensified throughout the years. Street harassment, in particular catcalling, has also become worse. I think that these are the main reasons for this trend:

Online harassment has also increased since the Internet has become more accessible. People feel protected behind their screens, and this makes it easier for them to harass whoever they want to harass – anonymously if they wish.

And now, with the pandemic, the harassment is even worse. Everything has shifted to a different realm, and we are now experiencing online what usually happens offline. For many people, the online world has become their only reality. People have more spare time, and are therefore more likely to use the internet as a tool for harassment. We understand that a lot of people are frustrated right now, but this does not give anyone a reason or an excuse to harass others online.

We are very excited that @catcallsofams is now part of an online campaign called #datmeenjeniet. This is a brand new campaign from Movisie and InHolland to raise awareness about online discrimination and harassment. Our hope is that both the internet and our streets will be safer and even more fun spaces for everyone in the future.