This case study is a part of Mama Cash and Astraea's report Vibrant Yet Under-Resourced: The State of Lesbian, Bisexual & Queer Movements

Family violence against LBTQ people in Indonesia is prevalent. LBTQ people are routinely expelled from their homes, subjected to forced marriage and marital rape, or forced to wear religious garments as a way of changing their sexual orientation. Non-binary and trans people may be forced to dress in ways that conform to society’s expectations of their perceived gender. Talita Kum is collaborating with and building awareness among activists and communities from different movements to challenge violence and promote the well-being of LBTQ people.

Mobilising allies and building communities where LBTQ people feel supported is the foundation of Talita Kum’s work. From its early years, starting in 2009 as a volunteer collective, to the more formalised organisation it has been since 2014, Talita Kum has used community organising to create grassroots change to improve the lives of LBTQ people. 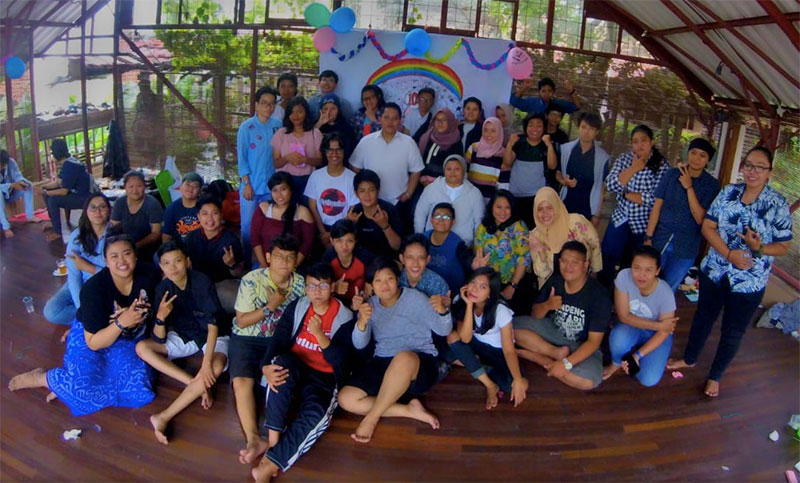 'Self-liberation'
To build support for LBTQ people, Talita Kum has collaborated with women’s rights organisations to push for the inclusion of LBQ women. They also work with religious groups, leaders, and scholars to humanise LBQ people and change norms about diverse sexual identities in religious communities. But their quest for the liberation of LBTQ people starts close to home. Talita Kum names self-liberation, or coming in (the notion of "coming out" to oneself), as one of the most critical and important parts of their work. It is focused on an acknowledgement of self and pride in oneself, without fear of rejection or being seen as a sinner.

To this end, the organisation offers peer support and an online resource center with vlogs, live- stream workshops, and articles to provide access to affirming resources. These types of services not only contribute to the health and well-being of their constituency, but also allow them to reach more people and serve as a launchpad to broader conversations about sexuality, consent, sexual pleasure, identity, and human rights.

“We don’t just focus on the number of LBTQ communities reached, but also on the quality of that outreach. We want to help people acknowledge themselves and their rights as citizens of Indonesia.”

Resourcing
Talita Kum initially began as a volunteer-based collective and has struggled at times to secure funding. Their experiences with resourcing their work run the gamut, from members using their own money to fund activities to receiving unrestricted funding for short periods. However, they most commonly receive project-based funding. Between 2016-2017, the organisation received no funding and used its budget reserves from the previous fiscal year. This allowed them to carry forward with organisational activities, but the reserves were not sufficient to cover any institutional costs, such as salaries and rent. Members of Talita Kum’s Executive Board have other jobs to supplement whatever salary Talita Kum is able to provide — typically very little given the limited general support the organisation receives.

Most donors tend to fund national organisations based in Jakarta, so organisations that are based outside of the capital or don’t have connections to Jakarta-based national organisations have limited access to funding. Many of the organisations that are funded are also able to produce audited statements, which Talita Kum is having done for the first time in 2019. For the upcoming year, the organisation is keen to earmark funds for health insurance and for the self care and personal well-being of its community organizers but has not found any donors interested in supporting this (although the group has been able to use their limited core funding for these needs in the past).

Learn more in the full report "Vibrant yet Under-Resourced"

Vibrant Yet Under-Resourced: The State of Lesbian, Bisexual, and Queer Movements.