In 2018 Mama Cash supported the first international run of the Sex Worker's Opera at the Compagnietheater in Amsterdam. In 2019, they became one of our grantee-partners in our Voice portfolio. And this year, they will contribute to the program of the fifth annual Mama Cash Feminist Festival - find out more here. 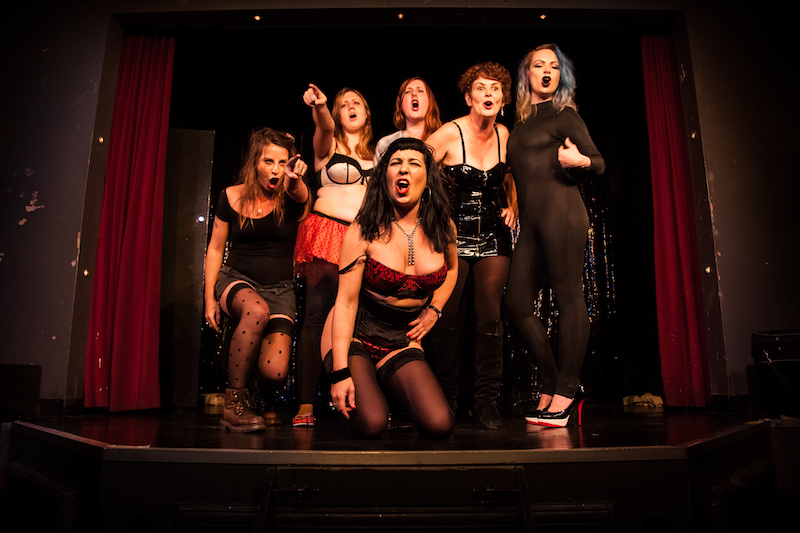 The relationship between feminism and sex work hasn’t been an easy one. With the gender balance skewing towards women sex workers and male clients, many feminists see the industry as the embodiment of the patriarchy, and therefore something to be abolished. But this narrative doesn't leave much space for the voices of sex workers who experience it differently.  This is where our grantee-partners the Sex Worker's Opera come in: with comedy, pole dancing, and music, they facilitate that much-needed conversation.

The idea for the Sex Worker’s Opera was born in 2013, when Alex was running a theater company together with Siobhan. As queer-identified people with second-generation refugee and migrant backgrounds, respectively, they shared some experiences and interests which they could explore together through art activism and street theater. Equally important was collaborating with other groups on the margins, like disability rights activists and feminist collectives.

Another issue they both wanted to address and support was sex workers’ rights. “And we passionately believe that all art about oppression should be led by the people experiencing it. So we began our research, we began community-building.”

Alex and Siobhan reached out to established activist organisations – like our grantee-partners English Collective of Prostitutes – but they didn’t stop there. “Members of our company engaged with sex work messaged hundreds of people on escort websites - we really reached far and wide, made sure to get the word out to remote areas of England.” And their efforts paid off: in February of 2014, they had their first meeting in London with 25 sex workers.

“Sex workers don’t necessarily agree with each other, and why would they?”

For some participants, being in a space with other sex workers was already the main event: “Society is stigmatising of sex workers, and people are isolated, and don’t have anyone to talk to. Some of our performers didn’t have any sex worker friends until they joined the project,” Alex says. “It was a very deep, emotional experience just being around peers.” 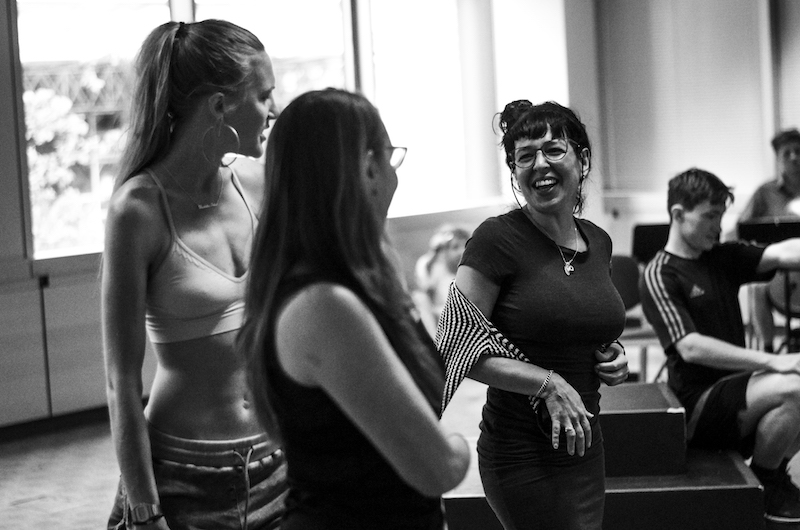 This is not to say everyone became instant best friends. After all, “sex workers don’t necessarily agree with each other, and why would they?” Alex points out. “Folks are coming from different places, having experienced different forms of oppression... we have to navigate that with love and solidarity and care and patience.”

And activist theater offers precisely the tools necessary for this delicate but crucial work of building mutual understanding. “One thing we do for example is have member with experience A perform a story by sex worker who has had experience B. This process allowed us to grow as activists, and that's actually where some of the deepest rewards of the project have been."

Because while the Sex Worker’s Opera is a smash hit, receiving glowing reviews from the press like The Guardian, Vice, and de Volkskrant, their audience is first and foremost the sex workers’ community itself. “The show is fabulous and onstage and public-facing activism, but we never wanted that to become more important than the internal work. What’s the point in a show if you don’t learn from and respect and love each other? That’s the kind of community-led healing which we need in our movements.”

That healing also comes in part from taking back control over the narrative about sex work. “Telling your own story is always deeply cathartic,” says Alex. Catharsis is one of the origins of the purpose of the theater, Alex points out: “It was designed into the ancient Greek structure: cleansing, transcendence, after a tragedy. Theater was about someone coming up against their biggest flaws and challenges and transcending them.” 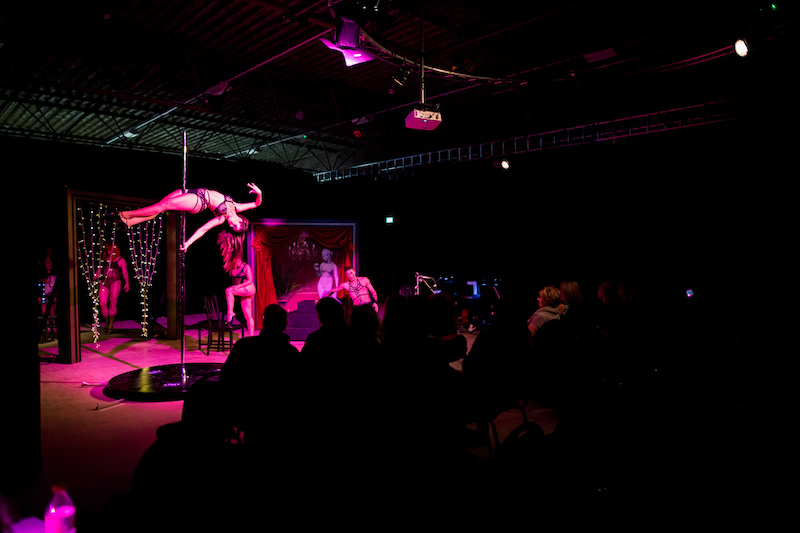 And stories of sex work told by sex workers themselves are a desperately-needed intervention on the dominant discourse. “There’s a tradition of rich white men writing stories about sex workers who are glamorous but tragic and die at the end, or fulfill a man’s journey, or give a moral lesson to all women about the virgin/whore complex in the form of slut-shaming,” Alex says. (Think of films like Pretty Woman, or series like Law & Order: SVU). “When you’ve been silenced, spoken over, stigmatised as sex workers have, and then can tell your story to an audience who respectfully listens – that’s catharsis.”

Alilí, a sex worker in the show, puts it this way: “It’s been powerful for me to be treated as an artist and to have lots of space to develop that and express that. Through performing in the Opera, I’ve been able to find the fun and the silliness and also some poignancy in my experiences with stigma, my  clients, and my family.”

From the artistic direction to technical production, the Sex Worker’s Opera is a sex worker-led project. In practice, this means that the Opera must consist of at least 50% sex worker participation at all times, and all creative decisions are made by sex workers. It was this ‘nothing about us without us’ principle which pushed the members to  consider how they could extend the performance’s story beyond their own experiences.

“We were a group of people of all different nationalities but still based in London, and we had no funding so  everyone there was able to volunteer. So despite the diversity of the group, it was only a certain voice represented,” Alex explains. “And when and you’re putting something on stage and saying ‘this is sex work’, you need to be able to say, this is about more than just these 25 people in this room.” 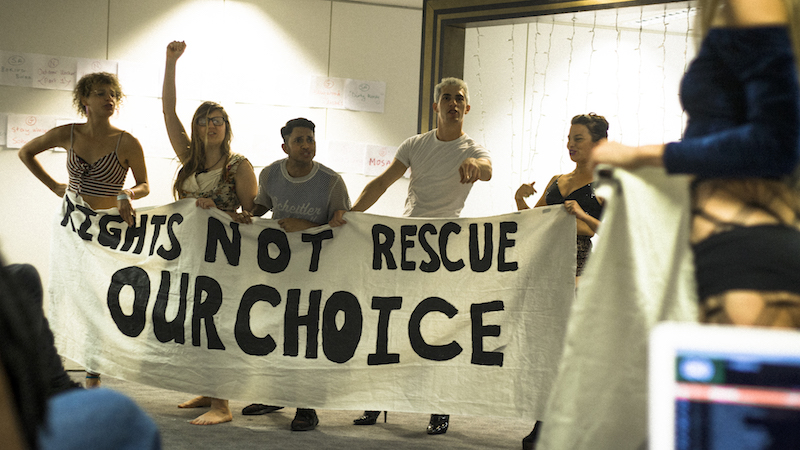 Through a friend who was an ally to the sex workers’ movement in Taiwan, they received their first international contribution: a song from Taiwanese sex workers’ collective. They then spent several more months contacting international networks, asking for stories from all around the world. “It’s about solidarity,” Alex says. “We’re all learning from each other, how each other survives, how we’ve managed our different identities.”

They received over 20 stories from 8 different countries, but after they pulled off the first show – no small feat considering they were only able to meet with the whole cast and crew, affectionately referred to as the family, a few days prior - they revisited the question of how they could include a wider range of voices in the next edition, and what the current barriers to submitting a story were. “Who has the time to type and send a story in, who has access to a laptop, to literacy, and how does that exclude so many people from the communities?”

“We’re much more passionate about getting local sex workers to create their own art.”

So for the next edition, they approached the story-collection process differently. Working with different sex workers’ groups and collectives around the world each year – first Chile, then Singapore, and South Africa (who also included ten stories about being HIV-positive) in 2018 - they offered paid commissions to local sex workers to go out onto the streets to outdoor workers, to brothels and cafes, and audio-record sex workers who wanted to share a story. Over the years they’ve now received over 100 stories from 18 different countries across all continents except Antarctica (“The penguins were shy.”)

Their relationship with the group in South Africa is a particularly special one: they had invited the Sex Worker's Opera to give them a training because they had received funding to do their own theater production – something the Sex Worker’s Opera would love to see happen more: “We’re much more passionate about getting local sex workers to create their own art.”

By telling their own stories through the playful and innovative form of theater, the Sex Worker’s Opera of course also plays an educational role for the general public, whether that’s someone who already consider themselves allies, who has conflicting feelings, or who aren’t sure where they stand and are simply curious.

The 50/50 model and the fact that the performers on stage are working with scripts based on stories from around the world – as well, as times, their own personal experiences – creates a safety net of anonymity for the sex workers involved. “People can be on stage without automatically outing themselves. You can’t assume. Someone could be an ally performing a story on the stage, or a sex worker telling their own story.” 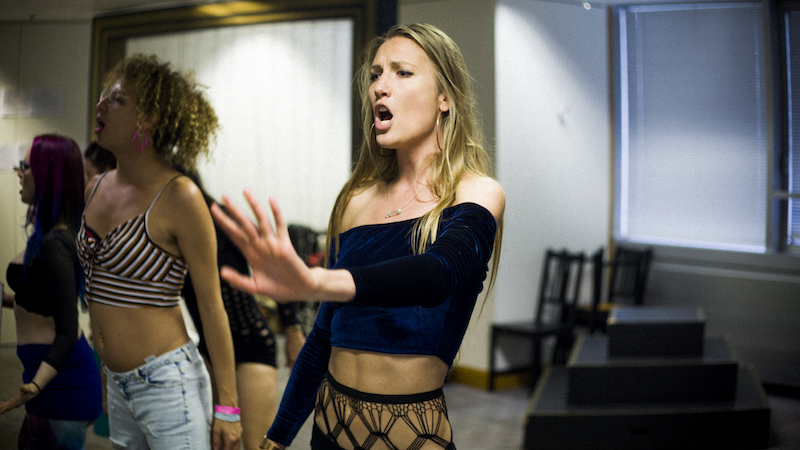 Involving allies as performers in the Opera is also an educational and community-building strategy. “Those allies are learning by doing what acting is, which is stepping into someone’s shoes and holding their body and emotion,” Alex says. “You have to really learn and care, and not just in an intellectual way but in a holistic way. This is part of how solidarity happens.” Plus, having a mix of allies and sex workers performers challenges assumptions the audience may unconsciously have.  “They’re confronted with the question: what does a sex worker look like? Because it could be any of us.”

“When we have differences within a movement we can’t just scream at each other, we have to get in a room together.”

But more simply,  Alex says, “that physical presence, your body being on stage, speaking from the heart, is already humanising and stigma-busting. And sadly that’s the baseline we’re aiming for: everyone just being accepted as human and not other.”

The Sex Worker’s Opera also does this educational work off stage, facilitating workshops with other sex worker’s groups and potential allies in the feminist, migrant and LGBTQ+ movements. “They may not agree with sex work or be unsure about their stance on it – but we believe in bridge-building. It’s very difficult to start any conversation in a healthy way without a spirit of generosity and care. When we have differences within a movement we can’t just scream at each other, we have to get in a room together.”

Bringing the poetry back

There’s one last thing about the Sex Worker’s Opera that Alex wants to say: “Our show is FUN and funny and it’s playful. The first half is pretty much all comedy - not because we don’t take these things seriously, but because sex is funny and society is ridiculous in the way it stigmatises sex and class, so for us it’s about being playful, and upending stereotypes through joy. Making people’s bodies a tragedy as the discourse around sex work has is quite a violent thing. We bring the poetry back.”

Cabaret as a political stance and instrument of change