Dikke Vinger* began three years ago as a support group for fat people in Rotterdam, founded by Merel Wildschut and Non van Driel (genderclowns.org). It has now developed into a group of people who actively devote their efforts to Dikke Vinger, including Sigrid and Anoesjka. Dikke Vinger initially focused on enabling people to share their experiences in a support group. For example: ‘How do people treat you if you are fat and how does that feel?’ The need to adopt a more activist approachdeveloped gradually, and an action group was created in addition to the support group. The action group conducts social media campaigns, offers consultancy services, blogs and organises events, such as a clothes swap. In 2020, Dikke Vinger also started recording a podcast, in which Sigrid and Anoesjka discuss everything related to fatness, from fat shaming to doctor’s visits. “So, basically, everything except dieting or losing weight. And we want to put radical fat activism on the agenda.”

This interview is part of a series of six conversations with activists who received a Spark grant. Through our Spark Portfolio, we support small, feminist initiatives in the Netherlands, and in Aruba, Bonaire, Curaçao, Sint Martin, Saba and Sint Eustatius We talked with activists from six different Spark groups about their work, their convictions and their drive. Photographer Sophia Maria Favela took their pictures. 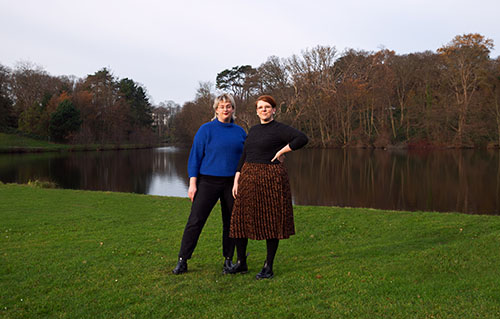 Sigrid van der Meer is 26 years old and is finishing their Research Master in Gender Studies. They make the Dikke Vinger Podcast together with Anoesjka. Anoesjka Minnaard is 30 years old, mother of a 2-year-old and a photographer. She focuses mainly on Dikke Vinger’s podcast and social media.

Why did you become involved with Dikke Vinger?

Anoesjka: “Before I become involved with Dikke Vinger, I had no fat friends. Since I’ve had them, I often think ‘oh, that’s so great!’. Before the coronavirus, we organised activities like a beach day, clothes swap, picnics and the like. It is super to do nice things with people where you feel at ease.”

Sigrid: “Just like Anoesjka, I was at Dikke Vinger’s very first support group. It was the first time that I found a place where fat people could come together and openly talk about being fat, without that fatness being seen as something bad or something that has to be changed. At a given moment, we came to a point where, in addition to activism in the form of support for ourselves and other fat people, we also wanted to adopt a more activist approach in the outside world. That is when we started the Dikke Vinger action group, and in addition to supporting fat people, Dikke Vinger also became a place for providing information and taking action on behalf of both fat and non-fat people.

Who are you targeting with Dikke Vinger?

Sigrid: “Fat is, of course, a vague concept. There are many people who feel fat, without being so. This is due to internalised fatphobia. However, if you feel this concerns you and you think that it could be something for you, then you are more than welcome.”

Anoesjka: “It should be made clear that there is a distinct difference between being called ‘curvy’, and being harassed and called a pig when you are eating chips on the street. In our mission, our manifesto and our communications, we target people who are structurally discriminated against and marginalised due to their size. People who can’t find clothes on the high street, don’t fit in the seats on public transport or airplanes, and are not taken seriously by the doctor.”

Why did you decide to start making a podcast?

Anoesjka: “The podcast is a great way to continue and further disseminate the discussions that are held in the support group. In this way, we can offer some form of support to people outside our direct group. And we also discuss matters like the connection between fatness and other themes in the podcast. For example, how fatness and gender, race and life with a physical impairment affect each other. Intersectionality, in other words, which still does not receive sufficient attention in the Netherlands.”

One thing that Sigrid and Anoesjka find difficult about making the podcast is striking a good balance between light-heartedness and depth and reflection. Anoesjka: “It takes quite a lot of vulnerability to talk about being fat”. You’re not always in the right headspace to talk about how the world stigmatises and discriminates against you because you’re fat. However, you also can’t be light-hearted about it all the time. Sigrid: “Our aim is to offer listeners a place where they feel acknowledged. We want to make an informative podcast, for sure, but at the same it’s also a conversation between two friends. That combination is important.”

What does the Spark grant mean to you?

Anoesjka: “The Spark grant will enable us to become a foundation in 2021. Being a foundation will hopefully ensure that we’re taken even more seriously and also that we will be able to reach more people. This will also provide us with more opportunities to apply for other funds. We’re currently working on a campaign about fatphobia in the healthcare sector, made possible by the Spark grant. And in 2021, we also hope to organise more campaigns, events and support.”

What was your biggest challenge in the past year?

Sigrid: “Processing the amount of fatphobia that surfaced due to the coronavirus crisis. The idea was widely spread that it was mainly fat people in the intensive care units, while that was not researched properly at all.” Anoesjka: “The coronavirus crisis clearly exposes the double standard that is often applied towards fat people. On the one hand, fat people are said to be a risk group, but at the same time people say that it’s our own fault. While other risk groups can count on empathy, the opposite is true for fat people.”

Sigrid: “People often have the idea that fatness is something that you can (easily) solve yourself. That bodies are manipulable and that it’s a personal failure if you’re not able to lose weight.”

Where do you want to be in the future?

Sigrid: “We want to reach different target groups. First of all, we want to be there as a support group for individuals who are fat, in order to offer them a place to talk with others who understand what it’s like to be fat. However, we don’t want to fall into the trap of saying ‘love yourself and everything will work out’, which is what the current body positivity movement is saying. Body positivity ignores the critical part of looking at society and at the institutional level: which policy is the municipality pursuing, and how are GPs handling this? You can’t solve those types of problems just by loving yourself. We also want to place radical fat activism on the agenda, and set up campaigns aimed at the government, as well as providing them with advice, in order to be able to achieve more at the institutional level.”

What are your aims for the coming year?

Anoesjka: “We are going to set up support groups in other cities. And we have launched a website where people can share the annoying experiences that they had in the healthcare sector. We’re currently holding discussions with the Dutch Ministry of Health, Welfare and Sport and the Healthcare Inspectorate about how they can call doctors to account, among other people, for their use of language. We want to ensure that the use of language towards fat people is non-stigmatising and non-discriminatory as much as possible and to explain that shame has never resulted in health and acceptance.”

*In Dutch “dikke vinger” literally means “fat finger,” but it also refers to giving someone the “middle finger”.