“We need to tell our own stories. I began to see this clearly more than ten years ago when I realised that Black transgender and intersex voices were not being heard in South Africa’s trans movement. We created TIA to fill this gap.” These are the words of Tebogo Nkoana, the founder and director of Transgender and Intersex Africa (TIA), explaining why trans activists founded the group in 2010. 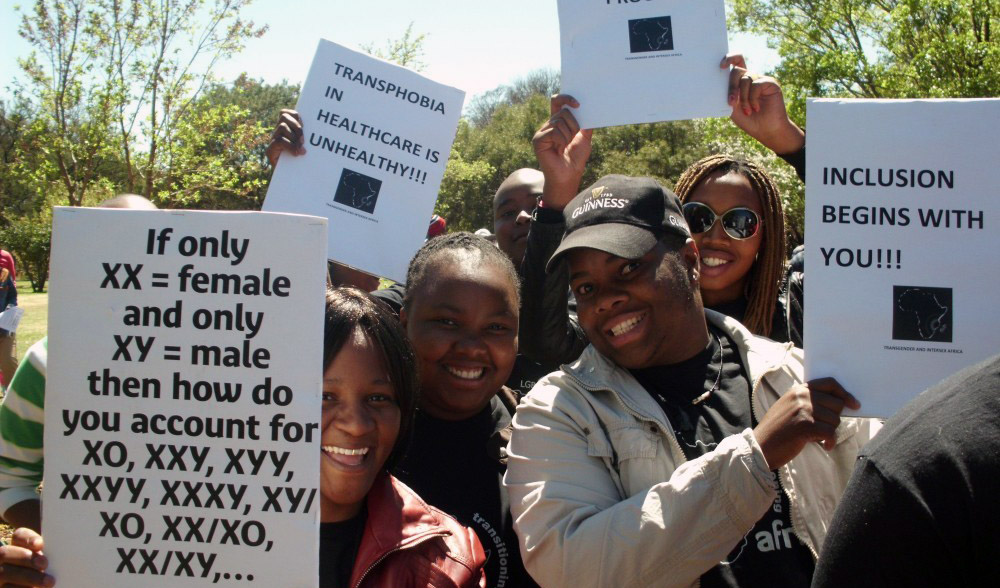 Tebogo continues: “There was, and still is, a lack of awareness about Black trans and intersex people in South Africa, particularly the people living in the townships and rural areas. From 2007 to 2010, I worked as an outreach officer with Gender Dynamix, a trans advocacy organisation in Cape Town. I came from a Black underprivileged background in Pretoria, and I realised that the work I was doing was not reaching most of South Africa’s Black community, which needed more basic support for community building and access to services. We were not reaching the people who needed services the most”.

Transgender, or trans, is an umbrella term describing people for whom the gender they were assigned at birth does not match their lived gender identity and expression. Intersex people are born with sex characteristics – genitals, gonads, hormones and/or chromosomes – that do not fit typical binary notions of male and female bodies. In South Africa, a deep silence surrounds the existence of Black trans and intersex communities. And when Black trans and intersex people are acknowledged, they often face discrimination, rejection and violence. They may be kicked out of their homes, unable to finish school, or denied access to employment and health care.

Prioritising the need for information and support

“One of the first things we did,” recalls Tebogo, “was to assess our community’s needs. We immediately saw the need for information and support, especially information in local languages. ‘Transgender’ was a brand new term for many people, and this was reinforced because it’s an English word. People were struggling with very personal questions: ‘How will I live this new life? Will people judge me? Will I be exposing myself to danger? How will I explain this to my parents, who do not even own a television?’”

Tebogo stresses that both coming out and transitioning are stressful processes. “It is not ideal to go through it alone”, he says. “So, we support people as they create a new life for themselves, and we also support family members and friends. We know that when a person transitions, they are not the only one going through it. Members of their family make a transition, too”.

In addition to raising awareness and providing support, access to comprehensive, gender-affirming health care is a major issue and one of TIA’s priorities. When TIA started its work, many people in the community didn’t even know it was possible to medically transition and become “who they really are”, as Tebogo says. “In TIA’s early years, the health system didn’t want to recognise our existence. But, over time, we have been able to make ourselves and our needs visible. We have worked with health care providers in local clinics and hospitals to change attitudes, and slowly, we have been able to open doors for more people to access gender-affirming health services.” In addition to accessing health services, TIA helps its constituents change their names or gender markers on official documents, another important issue for the community.

Tebogo talks about his own transition and the importance of using the media to change attitudes. “I transitioned openly, on television. The media interviewed me, and my parents were also involved. Before I transitioned, I lived as a lesbian because that was the only possibility I saw for myself then, but I knew I was a boy, and I needed to be myself. I was able to access public funding for my medical care, but I had struggled to access that information. I didn’t want other people to have to go through that. I realised that if I am an activist, I cannot have a private life. I was on an awareness-raising mission; people had never seen a Black person transition before.”

The last year and a half has been a challenging period for TIA’s community. “Many of us have lost family members who were dear to us. Other people have been disowned by their families. Many trans and intersex people work informally and have lost jobs, including many trans sex workers, who have had a very hard time. We started getting calls right away last year from people who had lost housing and needed shelter. And many of us had a harder time accessing medical services and crucial hormone treatments. TIA began right away by providing food parcels and other material support to community members who struggled to meet their basic needs. It has been a really difficult time; we have realised how unsupported our community is”.

In 2014, Mama Cash added support for trans activism to our mission. We had already supported trans groups for some time, but we realised that we needed to name trans people in order to support trans visibility and make sure that resources flow where they are needed. An analysis of the letters of interest (LOIs) that we reviewed between 2016 and 2018 showed that the requests from trans groups tripled during that period. Of the 624 applications that were most closely considered for funding by our programmes staff, the number that we reviewed from trans groups grew from 20 in 2016 to 60 in 2018.

While trans organising is vibrant and growing, resourcing has not kept pace. Research released by Astraea Lesbian Foundation for Justice (and partners) in 2017 showed that nearly three-fifths of trans groups worldwide received no external funding. More than half had annual budgets of less than $10,000, and fewer than one in three had full-time paid staff.

Tebogo: “We have received support from Mama Cash since 2011. We are the organisation we are today, thanks in large part to Mama Cash’s support. Mama Cash has never dictated how we use our funding, and that is very powerful. The trans community doesn’t receive enough support, and what we do receive is usually tied to programmatic initiatives. We need ‘core’ support – funding that we can use for salaries or other priorities that we set. Funders need to provide unrestricted funding, and this is something that Mama Cash understands”.