Sella Molenaar: "Everyone has a role to play" 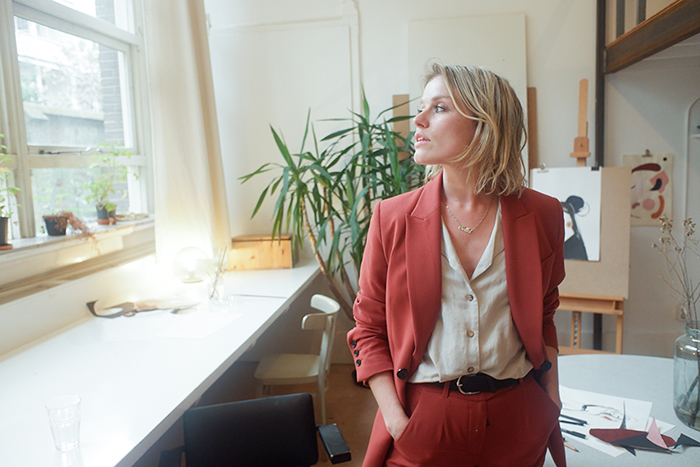 For Sella Molenaar, every woman is a walking source of inspiration. Since she was young, she would covertly sketch strangers who for one reason or another caught her eye: “Because that person has a cool jacket, or I like the shape of that person’s head.” She drew them not so much to capture them accurately as to capture that which she found interesting: a stance, a look, an energy, an attitude.

“Most of my work is related to fashion, but my fascination is always women.”

This interest is still what drives her work today as a freelance illustrator. “Most of my work is related to fashion, but my fascination is always women.” Working in an industry where white, thin, and able-bodied is still very much the norm can create some tension with Sella’s feminist politics. But increasingly she is creating space to share her views with her clients, and sometimes even experiences clients taking initiative when it comes to diverse representation.

“If there’s anything I want to be a part of, it’s the feminist movement worldwide.”

“I certainly don’t keep quiet,” Sella says, laughing, when we ask about how she deals with feminist issues in her work and life. “I can be quite fierce.”  But, she adds, she doesn't see herself as an activist. “I'm not standing on Dam Square with a banner, but I do raise awareness within my own circles. I prefer to have one-on-one discussions with people who aren't so engaged with these themes in their daily lives and may even see feminism as 'unnecessary' or 'extreme' - and in that way I try to open their eyes. Everyone has a different role to play.”

So when a student in the design class she teaches gave a presentation on Vlisco – a printed wax fabric developed in the Netherlands for African markets –she gently encourages them to do a Google search on the colonial history. When her landlord comes by to fix something and comments that Sella is relatively strong for someone of “the weaker sex”, she doesn’t let it slide. And when she’s with a white friend at a festival and they pull on an afro wig, she explains why that’s a no-go.

That’s why she was thrilled at the opportunity to design the tattoo for the My Body is Mine: “I want to be able to bring who I am and what I do together. If there’s anything I want to be a part of, it’s the feminist movement worldwide.”

Learn more and join the movement