Skip to the page content
Donate now
Search
To the homepage
Mama Cash will use your name and e-mail address to be in touch with you and to provide updates. You can change your mind at any time by clicking the unsubscribe link in the footer of any mail or by contacting us at shesupports@mamacash.org. By clicking the button above you agree that we may process your name and e-mail address in accordance to our Privacy Statement.
Back to overview
December 5, 2020

What did you do to allow this to happen? What time was it? What were you wearing? These are the kinds of questions that rape survivors should never have to hear. The One in Nine Campaign, based in South Africa, is working to ensure that someday they won’t. One in Nine works with survivors, activists and organisations to promote a feminist approach to understanding and ending gender-based violence. Founded in 2006, the group’s name refers to an abysmal statistic: only one in nine rape survivors dares to report the attack to the police.

One in Nine puts the voices of survivors, and womxn in general, at the centre of its work. How survivors feel and how they want justice to work for them is what matters most. The group builds support structures for survivors, including counselling, legal advice and accompaniment during legal proceedings.

After years of activism, they are starting to see their survivor-centred approach being adopted more widely, reflected in actions like #Ibelieveher. The government has also started to hear the message. In an unprecedented move, South Africa’s president recently declared gender-based violence a national crisis and acknowledged that the state needs to do more to end it. The shift is proof that the collective voice of activists and the tireless work of civil society organisations is starting to bear fruit.

One in Nine welcomes these positive changes, but still sees a big gap between what the government is now saying and what survivors are experiencing. Survivors are still vilified on social media, or pressured by their families and society to drop their cases. The criminal justice system still continues to serve perpetrators and disregard the rights and needs of survivors. The Campaign sees feminist political education as a key strategy for changing behaviours and attitudes in communities, strengthening the voices and advocacy strategies of womxn working to put pressure and agitate the government into action, and for systemic change.

Responding to the COVID-19 lockdown 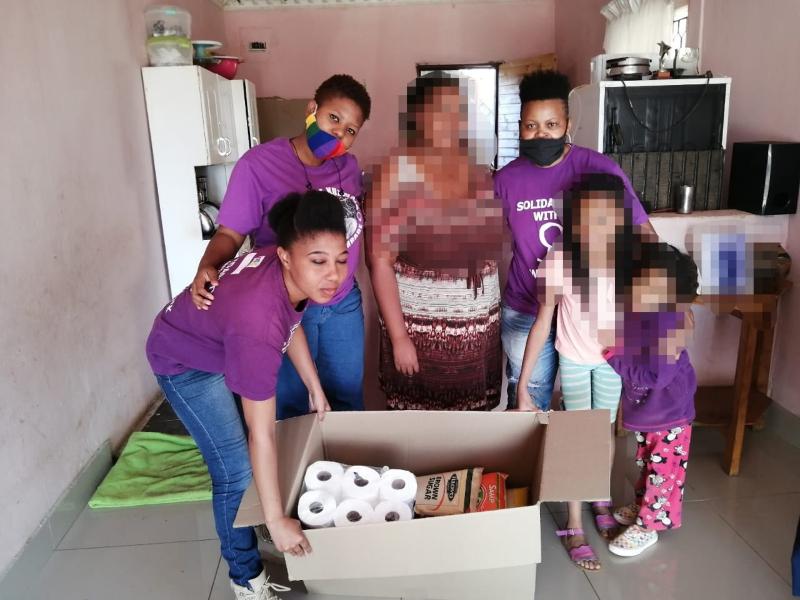 During the recent COVID-19 lockdown, One in Nine took up a new role, providing humanitarian relief to people in the community. Many womxn, especially LBQ womxn, and trans and intersex people were suddenly locked down in a hostile living situation. Many womxn reached out to the Campaign seeking shelter and assistance with food due to lost livelihoods. The group helped them find a place in shelters. And when these were full, One in Nine partnered with a community organisation, Tosunga Baninga, to convert its rooms into shelter space. With employers paying only a fraction of people’s wages, One in Nine also used its resources to supply food and child care to 140 families in need.

One in Nine’s programmes revolve around working directly with womxn in physical spaces. Its political education programme introduces womxn to feminism and shares tools for understanding and analysing violence and oppression, as well as other issues they face, like access to land, abortion and health care. The group brings together womxn from different communities and generations to learn from each other and build solidarity.

The pandemic has posed major challenges. Bringing people together to talk about issues, in person, is essential to One In Nine’s work. It is difficult for the group to replicate that work in an online environment. And most of the womxn the group works with are unemployed. They can’t easily go online and participate in a workshop via zoom. They may not have a phone or mobile data, let alone electricity, due to poor service delivery by the government, especially in townships where most of their constituents come from.

Sustaining the organisation
One in Nine is taking stock of these issues, and its strategies in general, as part of a strategic review and planning process. Looking forward, the group aims to strengthen its governing structure and its staff toward further building feminist activism. Mama Cash has supported and stood by the One in Nine Campaign from the beginning, sometimes as the group’s sole funder. The group credits Mama Cash for helping to sustain the organisation, and for taking the time to really understand the organisation, as well as the individuals who are part of it.