New challenges in times of coronavirus

The pandemic that is overrunning the world has tangible consequences for literally everyone. But the impact has been enormous for many feminist activists. The challenges that they have to deal with were already considerable. Now, they are changing and they have grown even bigger in some cases. The determination of activists has not been diminished by this. They are finding new ways to organise and to mobilise others.

It has been almost a year since Covid-19 turned the world upside down. Every continent has been hit by the virus. For anyone who was already in a somewhat vulnerable position, the consequences have been disastrous. Violence against women and girls has increased. Young lesbians and trans people have suddenly been confined at home with hostile family members. People who made a living from informal labour – street vending, cleaning, sex work, work in illegal factories – lost all income in one fell swoop due to the lockdown, without being entitled to financial assistance.

“The loss of income is, of course, a major problem everywhere”, says Shikha Sethia, Programme Officer for Money- Labour Rights at Mama Cash. “But anyone working in the informal sector has no safety net at all to fall back on. Without a formal contract, you also have no access to insurance or social security benefits. And access to medical care, contraception or hormone therapy is often also cut off if you do not have any money. So many people have incurred debts, suffered hunger and been in danger of eviction. This has happened to numerous activists who we support or members of the communities they work for.”

From sanitary towels to psychological help 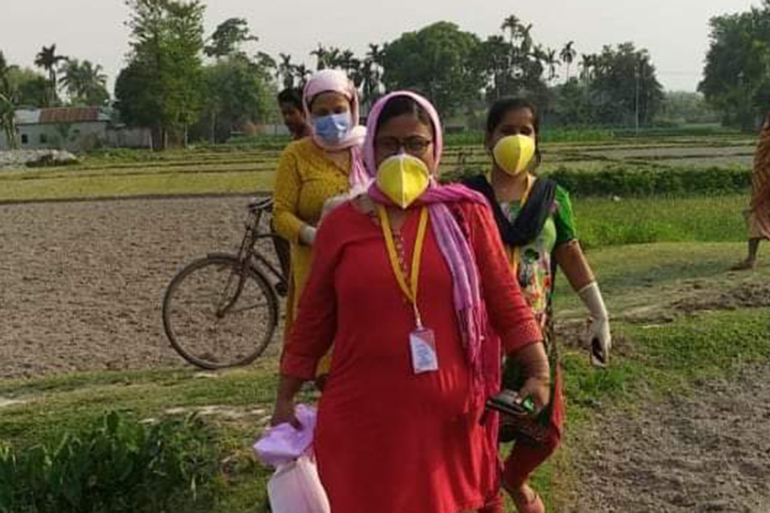 One direct consequence was that many of the groups that Mama Cash supports were abruptly forced to revise their priorities. Shikha: “All of a sudden, they were not giving training courses or lobbying for legislation as planned, but they were distributing food and menstrual products, or they were collecting money for medicines. For some groups, that was simply the most important thing they could do to support the communities within and for which they work.”

Shradha Shreejaya, Programme Associate for Asia and the Pacific, saw groups that, in addition to emergency assistance, also started organising accommodation and psychological help. “It can be very complicated for lesbian women or trans people, for example, to be forced to return to their family of origin, and this is something that has happened to many people in times of the coronavirus. They are often treated aggressively or violently.  Or they have not come out at all within their family and have to retreat into the closet all of a sudden. This takes a heavy toll and often causes stress or depression. Therefore, groups are setting up telephone circles, they are arranging temporary accommodation and they are calling in help following violent incidents.”

Meanwhile, all kinds of things are happening in other areas. For example, various governments have reversed labour rights that had been acquired under the pretext of ‘stimulating the economy, we have no other choice.’ In the Indian state of Uttar Pradesh, for example, the Minimum Wages Act and the right to facilities like childcare have been suspended for three years. In addition, mining companies in countries like Cambodia, the Philippines and Indonesia have currently been given free rein to let employees work under unsafe conditions and to flout environmental regulations.

And because public consultation is not possible due to lockdowns, numerous permits against which large-scale protests would normally have been lodged, are being pushed through in an underhanded way. For example, in the case of intensive agriculture or mining at locations that are vital to indigenous women, because they cultivate crops or keep livestock there. Closer to home, the Polish government has seized on the pandemic in an attempt to push extremely conservative abortion legislation through parliament.

Shradha: “Covid-19 forms an extra threat in regions where women’s rights are already under intense pressure. The pandemic is being used by all kinds of regimes as a new tool to prohibit gatherings and to curtail civil rights. Activists are being monitored more closely, limits are being placed on free press and violence is deliberately being fuelled against certain groups.”

Back on the streets

That is not to say that activists are taking this laying down. Following the initial shock, they are organising with renewed vigour. Shradha: “We are seeing the number of demonstrations increase once again and protest movements even seem to be growing stronger. Nurses have taken to the streets in India, and elsewhere female farmers and indigenous activists have been standing up for their land rights.  Our partners are finding new ways to organise and to mobilise others. Online, but also on the streets. What’s more: their confidence in being able to garner support and allies is growing.”

Shikha: “As difficult as this time of crisis is, the need to deal with its impact has made groups more resilient and embedded them more firmly in their environment. People see what these groups can do to help them, how much power they have and where their solidarity lies. They come to our partners with questions. And activists have been forced to develop new skills in order to raise money or to highlight their work in new ways. That is making them stronger.”

A good example, according to Shikha, is the Spanish Asociación de Profesionales del Sexo (APROSEX), which is normally devoted to reducing the stigma attached to sex work and getting sex work recognised as work. “They’ve managed to set up a mutual relief fund in a short space of time. They have also opened up a broad discussion, together with other activists, about the usefulness and necessity of a basic income for everyone in vulnerable work situations.” Shika also sees the fact that the crisis has led to greater recognition of informal work as a bright spot in difficult times. “It has always been an important demand from women’s rights activists. Due to the current crisis, people are paying greater attention to what they’re saying and the issue is really gaining traction.”