Skip to the page content
Donate now
Search
To the homepage
Mama Cash will use your name and e-mail address to be in touch with you and to provide updates. You can change your mind at any time by clicking the unsubscribe link in the footer of any mail or by contacting us at shesupports@mamacash.org. By clicking the button above you agree that we may process your name and e-mail address in accordance to our Privacy Statement.
Back to overview
April 20, 2022

‘Every woman needs to know her rights’

Gender-based violence framed as ‘discipline’. The exclusion of women from family and community decision-making because ‘the father decides’. Early marriages that prevent girls from finishing primary or secondary school. These are some of the patriarchal norms that Patinaai Osim, a self-led group of Maasai women in Kenya’s Kajiado county, is determined to change so that women and girls can enjoy their full human rights.

Founded eleven years ago, Patinaai Osim raises awareness among women about their rights and engages in policy advocacy with the county government. The group’s executive director, Semerian Sankori, says that this combination of ‘making noise’ to change attitudes in the community and working to secure county-level women’s rights policies is an effective change strategy. 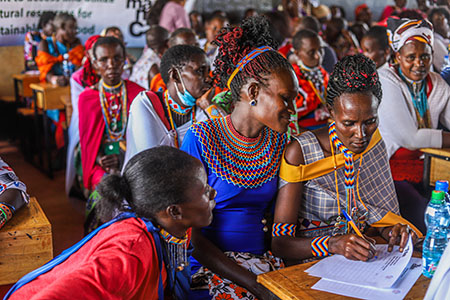 In community workshops, Patinaai Osim brings 20-30 women of all ages together for two or three days. ‘We sit together under the trees, or any space available, and talk. For us, education is key. Every woman needs to know that women’s rights are human rights and that they have a right to live free from violence and discrimination, to own property, to access resources and land, and to vote,’ says Semerian. Feedback has been enthusiastic, and women often ask for trainings to be repeated.

Core support from Mama Cash’s Resilience Fund has contributed to Patinaai Osim’s ability to strengthen its work. The group now has five paid staff members, rents office space, maintains a website, and engages the media. This all adds up to greater visibility and credibility, which has bolstered the group’s advocacy. Patinaai Osim has contributed to the development of policies to stop female genital mutilation and to address the structural ways women are excluded from decision-making and access to resources. For example, the implementation of a county-level gender mainstreaming policy, which the group helped draft, has improved women’s access to water at community boreholes.

In a semi-arid climate where worsening droughts are more common than rainfall, Patinaai Osim is also building women's knowledge about climate change. The group’s education efforts are supporting women to use both modern and traditional knowledge to protect biodiversity and invest in solutions, like saving and planting indigenous trees.

‘I never expected to see the day that a man would publicly say that beating a woman violates her rights. Our trainings help women to know their rights and their children’s rights, and this knowledge is empowering for women. We are seeing the impact.’