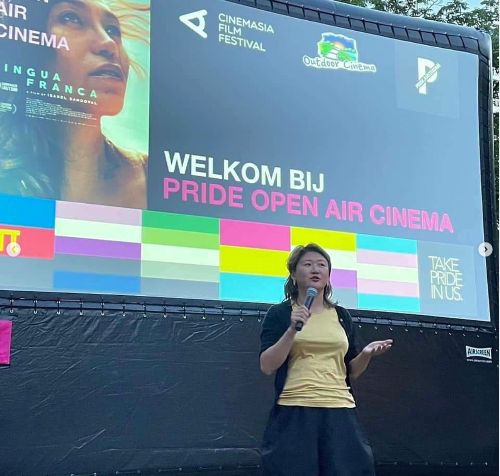 The CinemAsia Film Festival, started in 2003 as the Queer & Asian Film Festival, promotes Asian (diaspora) stories in the Netherlands and encourages conversation about Asian Dutch culture, representation, and visibility. Founded by the lesbian, Asian-American filmmaker Doris Yeung, the Festival has always brought a focus to LGBTQ stories. Emphasising self-determined representation and encouraging conversation about diversity and inclusion, CinemAsia has been a trailblazer for Asian Dutch LGBTQ community organisations.

Twenty years ago, Asian Dutch groups, with the exception of the post-colonial Dutch-Indonesian community, were not very visible in the Netherlands. One of CinemAsia’s contributions has been the creation of a pan-Asian platform that brings different communities together in conversation about visibility and representation. Initially a biennial festival, with a strong LGBTQ focus, CinemAsia has broadened its focus over the years to include other Asian and Asian-diaspora films. Since 2012, the festival has been held annually, screening dozens of films and attracting an audience of thousands.

For many years, CinemAsia was the only Asian LGBTQ platform in the Netherlands; in recent years, however, new Asian LGBTQ groups have started to emerge. During Amsterdam’s 2021 PRIDE celebration, CinemAsia screened a film, followed by a panel discussion on the rise of anti-Asian hate during the corona pandemic, in collaboration with other queer Asian organisations, creating a wave of visibility that was a milestone for the community, says Dewi Vrenegoor, CinemAsia’s lead fundraiser.

Despite CinemAsia’s vibrant history, the current fundraising climate is challenging. The growing visibility of Asian films (such as the Oscar-winning ‘Parasite’) and Asian filmmakers’ successes in accessing larger festivals make it harder for smaller festivals like CinemAsia to secure funding. ‘But the truth is, CinemAsia’s work is needed,’ says Dewi. ‘If you watch television in the Netherlands, you won’t see Asian Dutch people represented. And if we are, it’s because one individual has been invited in as an inclusivity gesture. We are still not included on an equal basis.’

In 2021, CinemAsia lost its structural funding from the city of Amsterdam, and the group’s work has been more difficult during the pandemic. ‘We applied for funding from the Revolution Fund because of all of the challenges we are facing. We are really pleased with the Revolution grant because it will allow us to ensure that, no matter what, queer Asian films will be screened during the 2022 festival in May.’