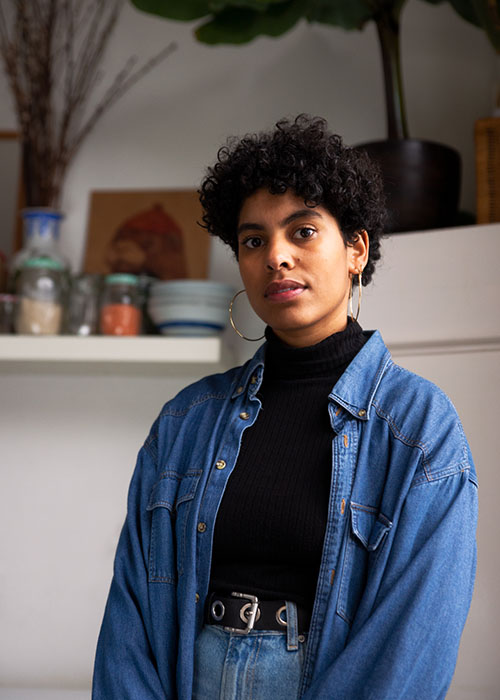 In 2018, Sophia Blyden organised the very first Stories of Womanhood event together with Sharona Badloe. Blyden now organises one or more evenings every year, together with four other women, during which performers spotlight stories and testimonies about womanhood and femininity. Spoken word, music, a theatre monologue, a panel discussion: all possible forms of expression are presented during Stories of Womanhood. The evenings are also varied in terms of the choice of subjects. For example, a spoken column about the importance of more women in politics can be followed by a rapper who pays tribute to his mother. Sophia Blyden: “The common thread is that all performances must make a statement and offer a critical view of society and the position of women.”

This interview is part of a series of six conversations with Spark activists. Through our Spark Portfolio, we support small, feminist initiatives in the Netherlands and in Aruba, Bonaire, Curaçao, Sint Martin, Saba and Sint Eustatius. We talked with activists from six different Spark groups about their work, their convictions and their drive. Photographer Sophia Maria Favela took their pictures.

Sophia Blyden is 27 years old and lives in Leiden. She studied Dutch and works in the creative sector, where she is involved with marketing and communications. She has worked for organisations including VPRO and Read My World. In addition, she performs as a spoken word artist.

What prompted you to begin Stories of Womanhood?

“I did the Humanity in Action fellowship together with Sharona Badloe, in which you learn how to organise an effective action in order to put social justice and human rights on the agenda, and how to strengthen them, in your own community. That led to the plan for Stories of Womanhood. Together with Sharona, I began organising the first edition in 2017. On 8 March 2018, the time had finally arrived. We were booked in the small auditorium of the Bijlmerparktheater (we were expecting about 20 people), but ultimately sold so many tickets that we were moved to the large auditorium. There were about 60 people in the auditorium who had come to watch the five performers we had invited to participate in the first edition. We received so many positive reactions from the audience afterwards that we decided to continue, even though we were actually only going to organise one edition.”

How do you operate and what do you want to achieve?

“Our team currently consists of five impassioned women. We organise one or more evenings every year. There was one in 2018, in 2019 there were two, and in 2020 we wanted to organise three. Unfortunately, we didn’t manage to do that due to the coronavirus. Every edition of Stories of Womanhood is different. The various performances are carefully selected by the five team members. The common thread is that all performances must make a statement and offer a critical view of society and the position of women.

I once said that I wanted to sell out Carré [one of Amsterdam’s largest theatres] for our tenth anniversary. However, Stories of Womanhood doesn’t measure success in terms of a sold-out Carré. Success lies more in the feedback that we receive as a team; in building a community of creative people who all relate differently to womanhood. Empowering people and connecting them with each other is important to us. And also that different stories are being told: ordinary stories that do not always fall within the norm, and, as a result, stories that are less often heard.

I hope that people in the auditorium sit and think: ‘I recognise myself in this’ or ‘I never thought about it like that’. I hope that the Stories of Womanhood evening enriches, that you learn something new. For us, that’s success. That is enough.”

What does the Spark grant mean to you?

“It’s the most special grant opportunity that we have come across so far. It is special to us that Spark is specifically focused on feminism and that our work is recognised. Mama Cash really sees us and appreciates us as people behind the story and the group. The application procedure is also pleasantly accessible. You don’t have to spend hours on it, while having the feeling that you’re not going to get the grant anyway. Time is very important to us, because we all work as volunteers for Stories of Womanhood. All the money that we receive via grants goes to the performers and the location, with our goal being to break even. With the Spark grant, we can make an entire edition.”

What was your biggest challenge in 2020, the year of the coronavirus crisis?

“The biggest challenge lay in the insecurity and the constant deliberations. Would we start doing the event via a livestream? Did we want to try out a different form? Stories of Womanhood is an event where you create an atmosphere in the auditorium, a temporary safe space. That is more difficult to create via internet. It was difficult to decide that we didn’t want an online version and to accept that it couldn’t happen in 2020 as a result of that.

In 2021, we hope to organise one Stories of Womanhood edition in any case and maybe more. And we also want to organise an exhibition with portraits of visitors during the evenings of the show. And a market, where entrepreneurs can sell hand-made products, such as jewellery, prints, bags and ceramics. In this way, Stories of Womanhood will provide an entire evening full of new discussions and experiences.

In addition to the evenings, we also organise Zoom get-togethers, in which performers exchange thoughts on the creative process. And we’re thinking about a podcast. Who knows!”