In our new monthly series, ‘Collectively creating change’, we highlight the work and impact of our grantee-partners. This month: Sabokahan (Unity of Lumad Women) in the Philippines.

Mindanao, the southern region of the Philippines, is home to indigenous peoples collectively called the Lumad. The majority of Sabokahan members reside within the Pantaron Mountain Range, a key biodiversity site in Southern Philippines and the ancestral domain of the Manobos. As in many other places in the world where indigenous populations have been marginalised (like Canada, the US, Australia and Brazil) the Lumad people do not have equal access to basic social services such as education, reproductive health services, and livelihoods.

But on top of that, the region is seeing increasing poverty because of a phenomenon called land grabbing: the practice by which previously public or ancestral lands are claimed by the government, often to sell to foreign companies under President Duterte’s development program, ‘Build Build Build.’ This drive for economic growth has meant infringing on indigenous people’s rights and land to make way for profitable enterprises like mining, logging, monocrop plantations. Not only do these displace indigenous people from their land, but they exploit and damage the environment, draining the land of the natural resources that they rely upon for their livelihoods. And as women tend to be responsible for producing food for their families and communities - farming, gathering root crops, and taking care of the farm animals - they are particularly affected, and yet due to this work have limited time to partake in political activities and make their concerns heard.

Along with this land grabbing, the Mindanao region is becoming increasingly militarised; in fact, it’s under martial law (rule by military). So as indigenous women are protesting their displacement, they are increasingly tagged as “enemies of the State” or “rebels” because they oppose the plunder of their lands. Activists and indigenous women leaders have been arrested on trumped-up charges and even the victims of extrajudicial killings. 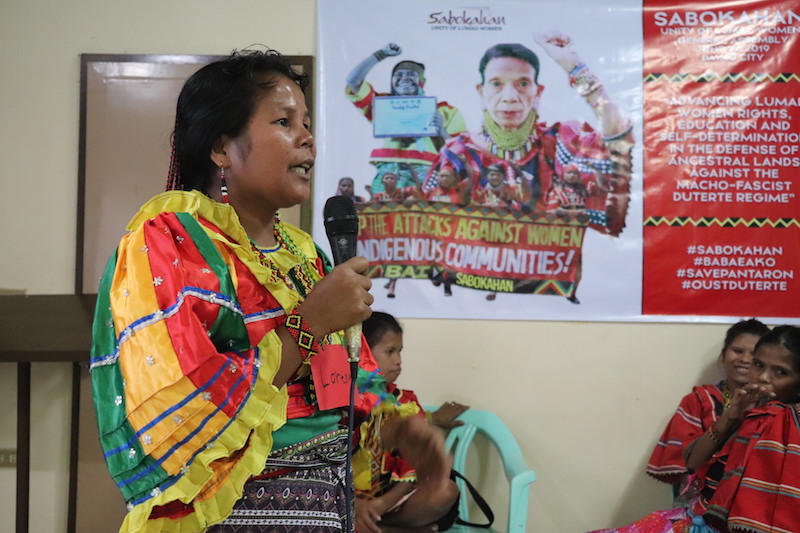 It is in this highly fraught context that Sabokahan (Unity of Lumad Women) come in. Working from a women’s rights perspective, this indigenous women-led membership organisation strives for the equal recognition of Lumad women in the indigenous peoples’ movement for rights to ancestral lands and self-determination. They organise to protect Lumad women from violence, implement sustainable community-based livelihood programs for Lumad women, and defend indigenous lands from land grabbing and deterioration caused by corporate ‘development.’

Sabokahan takes all possible paths to achieve their mission. They engage with media through press releases, and giving interviews in TV and radio. They also have their own slot in a radio programme called “Lumad on Air”, a valuable tool for raising awareness among Lumad communities, the majority of which only have access to radio. They organise demonstrations against martial law, the murder of activists, and for the defense of their ancestral lands and education. They lobby the government, initiating dialogues with state representatives and arranging community visits for advocacy purposes. They also stand in solidarity with other indigenous struggles such as the protest at the Standing Rock reservation in the US against the Dakota Access Pipeline, connecting these struggles to their campaigns such as Save Pantaron Mountain Range and Save Our Schools.

The hard-won results of Sabokahan's work are clear. Take education: after they actively took the lead in campaigning for Lumad’s access to education, community-based Lumad schools were formed in Southern Mindanao, and many communities now are expecting hundreds of Lumad girls to graduate from their schools. And thanks to their outreach to students and youth, there has been a notable increase in advocacy for Lumad communities at major universities.

Sabokahan also played a large role in facilitating Lumad women to become community health workers who would be able to attend to women’s reproductive health, children’s health, and comprehensive care in their communities. This resulted in the establishment of a community-based health program in more than 10 indigenous communities in Southern Mindanao which (in part due to marital law) previously did not have access to basic health services. 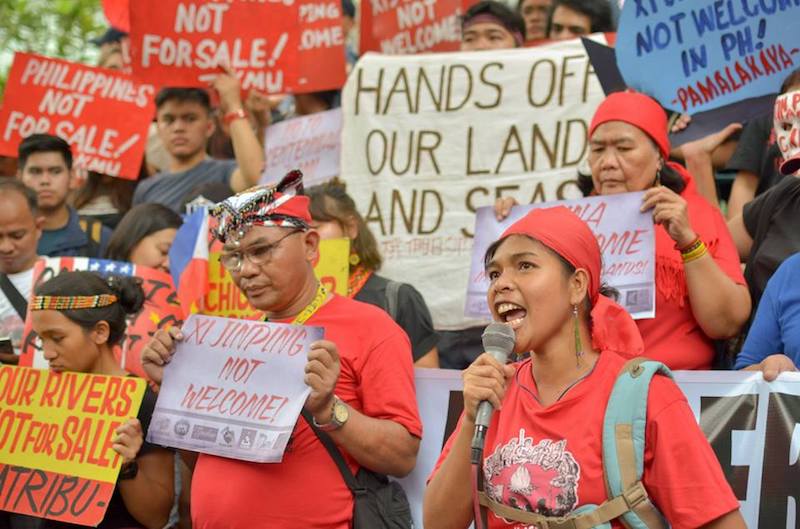 And as a consequence of their advocacy work, indigenous women’s voices are being increasingly recognised, listened to and considered in political spaces. They started an alliance with the Commission on Human Rights on issue of Lumad killings, and have had dialogues with Vice President Leni Robredo, and Chief Justice Lourdes Sereno on the violence against indigenous women under martial law. Being part of these political networks allowed Sabokahan to file at the Supreme Court a petition to stop the extension of martial law.

And luckily, Sabokahan is not in this fight alone: they are part of the network of indigenous women activists created by our other grantee-partners Bai Indigenous Women’s Network, while connects groups doing similar work around the country. By supporting each other, sharing knowledge and experience, and strategising collectively, they are ensuring that foreign commercial interests and the repressive regime of Duterte will not have the final say when it comes to their rights, their land, and their lives.