Since launching the #MyBodyIsMine campaign on June 4th, many of you have been vulnerable and courageous enough to share your personal experiences with us and each other. Below, with permission from the original posters, we share a few that moved and inspired us.

Iris
In the caption of her #MyBodyIsMine post, vetinary assistant Iris writes about the stomach reduction surgery she had a year ago: “I wanted so badly to be thin agan. Then everything would be better, everyone would like me again, I would have the confidence to do anything.” 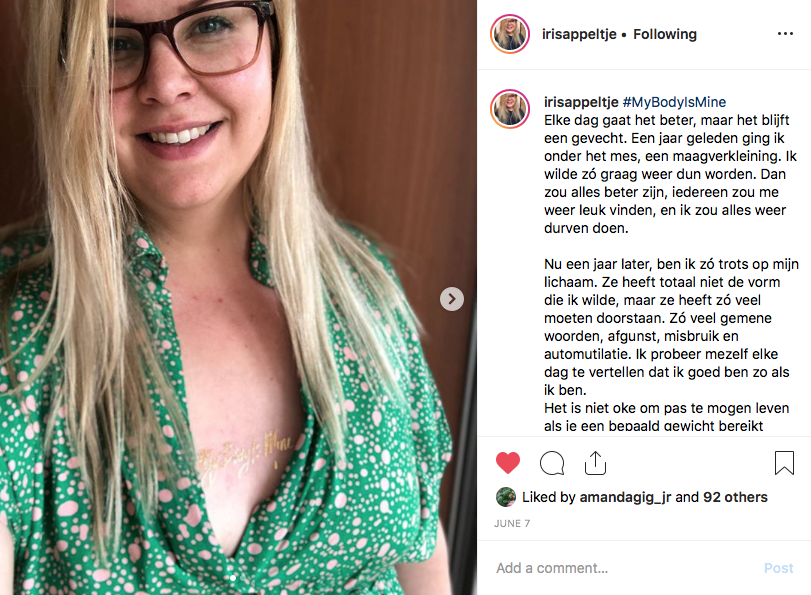 Now, a year later, Iris says, “I’m so proud of my body.” Not because of meeting any so-called ideals – as she puts it herself, “I’m still fat.” Rather, she’s proud because of everything her body has been able to withstand: “So many cruel words, envy, abuse and self-harm. Now I try to tell myself every day that I’m fine that way I am.”

“It’s not okay to feel like you can only start living when you’ve reached a certain weight.”

But Iris also wants to share that message with others through #MyBodyIsMine: “It’s not okay to feel like you can only start living when you’ve reached a certain weight. You have a right to be here, you have a right to take up space ... be a bit kinder to yourself, and to others.”

Aura
One of the founding members of the initiative Dance with Pride Aura writes: “I have for a long time not felt ownership or safety in this body. This is not a unique statement from those who have suffered physical and mental abuse.” 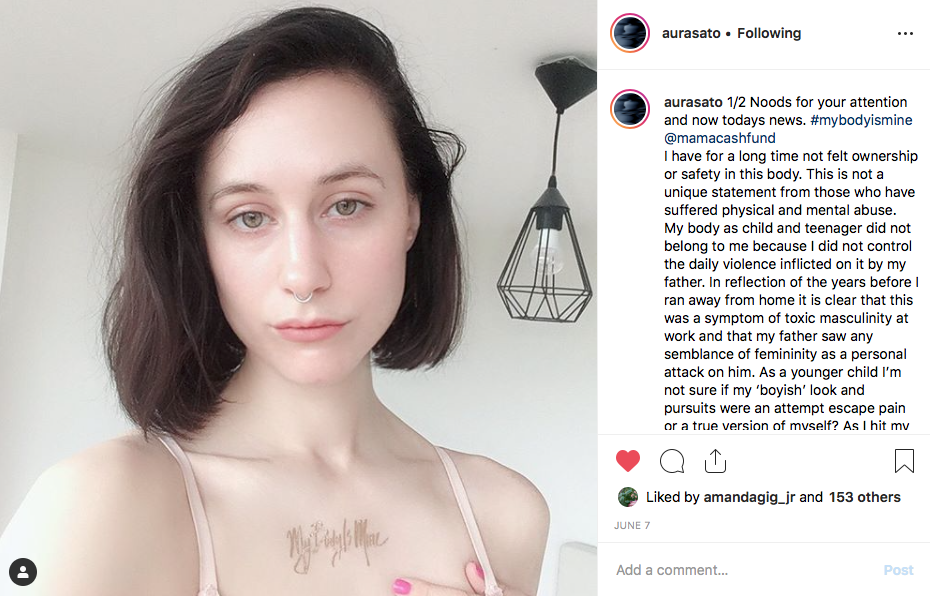 In her two-part #MyBodyIsMine post, Aura describes the daily violence inflicted on her body by her father growing up, and how his toxic masculinity affected her ability to explore or develop her gender identity freely: “As I hit my teens an my body changed against my will I was punished for the way I looked and spoke and moved in ways I couldn’t control and my visible femininity began to make my life even harder.”

Rejecting femininity and playing the 'cool girl' became a survival tactic: “This was a place I could sometimes be safe and he curated my personality and taught me a discography of obscure punk records to impress his friends with, the names of football players, and when I needed to shut the fuck up.”

“The after effects run deep and even years after I left home I was binding my boobs down because i wasn’t comfortable and didn’t feel safe in this feminine body. The cool girl thing is the hardest to shake, to truly feel like I’m my own person and I haven’t been a curated male fantasy. To be able to feel my femme energy on days when it is present and not punish it. To have my own voice to make it heard is just something I have started feeling my way into nearly 15 years later.”

Sami
Spoken word artist Sami took the opportunity with her #MyBodyIsMine statement to emphasise that despite ongoing inequality, "Being a woman makes me feel very powerful [...] we are queens!” 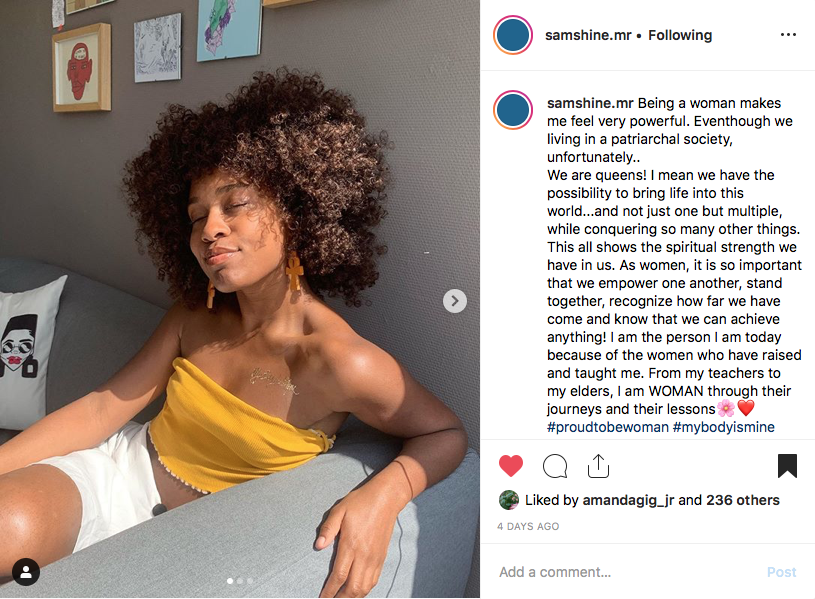 “As women, it is so important that we empower one another.”

That power, Sami writes, has everything to do with being in solidarity with other women. "As women, it is so important that we empower one another, stand together, recognize how far we have come and know that we can achieve anything! I am the person I am today because of the women who have raised and taught me. From my teachers to my elders, I am WOMAN through their journeys and their lessons.”

Eline
Eline, a disability rights activist and part of the Ziek. De Podcast ('Sick. The Podcast) team, penned a powerful post about her complicated relationship to the slogan #MyBodyIsMine: “This is a tough post to write. The truth is: my body doesn't feel like it's mine.” 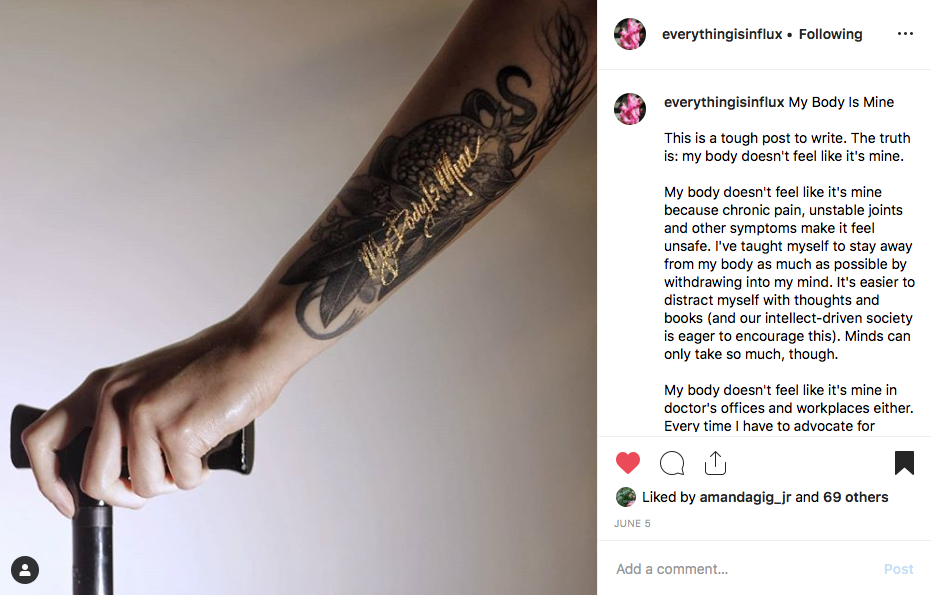 In addition to the chronic pain, unstable joints and other symptoms Eline experiences, “every time I have to advocate for myself because 'I don't look sick' my agency is taken away from me. When the world sees my mobility aids I'm turned into a public object, a canvas for projection, a target for invasive questions.”

“Learning to accept myself and taking ownership of my body and disability is the hardest thing I've ever done. It's a complicated process that is never finished. This Mama Cash campaign is therefore just as much a reminder to the world as to myself: my body is mine.”

Tessel
In her #MyBodyIsMine post, Pisswife Zine co-founder Tessel emphasises the importance of having a feminist community in processing a violation of her boundaries:

“A little over a year ago I felt my body was not mine. Someone took advantage of me being a young woman in a bad place and violated my trust, my care, my house and my body. It is because of feminist activism that people who have experienced violent misogyny have resources and are being heard. And it is because of feminist community building, and my girls at @pisswife that I feel comfortable in reclaiming my space and my body. ❤️ Thank you @mamacashfund for this important campaign! #MyBodyIsMine”

Isabel
Isabel, a Vienna-based musician, posted a photo of her arm and hand, with the #MyBodyIsMine tattoo along her upper arm. This part of her body had a particularly relevant experience associated with it: 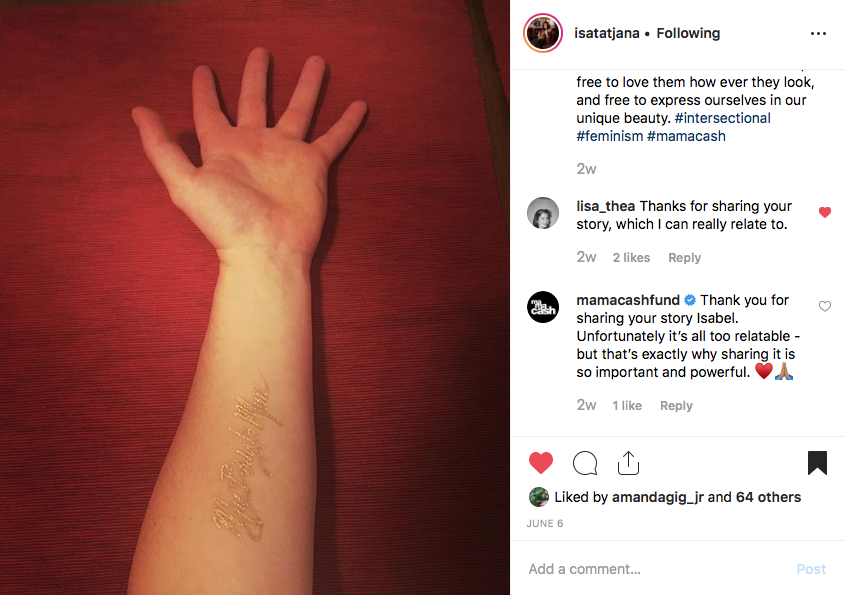 “This is my hand. When I was sixteen, I slapped a man in the face with it in a club after he had groped my breast. It felt exhilarating. I felt so strong and proud that I was able to instinctively defend myself. But after this the man became extremely aggressive, snatched away my cigarette and shoved me so heavily that I fell to the ground. When I got up he shoved me back down again.

“We want a world in which we are free to decide what we do with our bodies.”

“The worst part was that none of the bystanders came to help me. I was so shocked to learn that my self-defense reflexes would actually put me in greater danger. To learn that it was smarter to smile and ignore. To learn that no matter how emancipated I felt, there would always be a man stronger than me.

But for Isabel this doesn’t mean giving up the fight: “All women* and trans folk have the right to live in a world where their bodily integrity is not constantly under threat. But we want more than to be free from violence: we want a world in which we are free to decide what we do with our bodies, free to love them how ever they look, and free to express ourselves in our unique beauty.”