Skip to the page content
Donate now
Search
To the homepage
Mama Cash will use your name and e-mail address to be in touch with you and to provide updates. You can change your mind at any time by clicking the unsubscribe link in the footer of any mail or by contacting us at shesupports@mamacash.org. By clicking the button above you agree that we may process your name and e-mail address in accordance to our Privacy Statement.
Back to overview
June 5, 2013 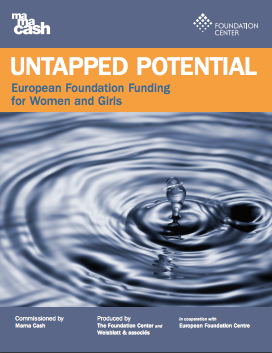 90% of European foundations surveyed expressed interest in at least one issue related to women and girls. About one third (37%) intentionally focus at least some of their work on women and girls. Yet, in 2009, the median percentage of total grant monies actually allocated by foundations in support of women and girls was only 4.8%--of which only one fifth focused on human rights.

“The gap between interest and investment tells us is that there is genuine potential and motivation for European foundations to step up and provide more funding for women and girls,” said Nicky McIntyre, executive director of Mama Cash. “Data consistently show that no country has yet achieved gender equality. We at Mama Cash hope that this report’s findings will inspire conversations and collaborations that will, in turn, contribute to mobilising leadership and realizing increased giving in support of the rights, well-being, and empowerment of women and girls.”

Of the foundations that expressed an interest in issues related to women and girls, particularly high levels of interest were noted for violence against women (74 percent), poverty among women and/or girls (73 percent), and women’s and/or girls’ access to education (71 percent). As a funder committed to reaching those at the margins, Mama Cash was disappointed to note that funding for lesbian, bisexual and trans rights generated the least interest among foundations surveyed, and currently receives the least amount of funding from foundations.

“As the first research study of its kind to examine the scope, distribution, and diversity of European-based funding for women and girls, this report establishes critical baseline data for measuring change in the future,” said Seema Shah, director of research for special projects at the Foundation Center.

“The report also represents the most comprehensive study to date on the philanthropic activities of European foundations in general,” added Gerry Salole, chief executive of the European Foundation Centre. “We are excited to see the ways in which this rich data will inform future giving that advances the public good in Europe and beyond.”

Altogether, 145 foundations from 19 countries participated in the study. The report draws upon a mixture of survey, grants, and interview data to understand the range of foundation characteristics and interests, as well as their specific approaches to work related to women and girls. The report was made possible in part by support from the Ford Foundation.

Funding for Inclusion: Women and Girls in the Equation

Why progress in women's rights has been compromised

Collective Change: The Value of Mobilizing Local Resources for Women’s Rights in the Global South and East