Skip to the page content
Donate now
Search
To the homepage
Mama Cash will use your name and e-mail address to be in touch with you and to provide updates. You can change your mind at any time by clicking the unsubscribe link in the footer of any mail or by contacting us at shesupports@mamacash.org. By clicking the button above you agree that we may process your name and e-mail address in accordance to our Privacy Statement.
Back to overview
November 20, 2018

Remember when we organised a fundraising event ('Meisjes die vragen') back in July? By reaching out to their own networks, a community of Mama Cash supporters raised €15,000 euro for feminist initiatives in the Netherlands in just ten hours.

Then in September we put out a call for applications. And as the applications started coming in, it was amazing to see how much feminist, anti-racist and LGBTQI+ organising is happening right here in our backyard.

The only downside was that we couldn't support all of the 100+ applications we received with the money raised for this new Spark portfolio. Our advisory committee, made up of six activists from across a range of social justice movements in the Netherlands, had many long and difficult conversations, in the end deciding to support a diverse range of groups doing urgent work. And we´re thrilled to be able to introduce those groups to you now! 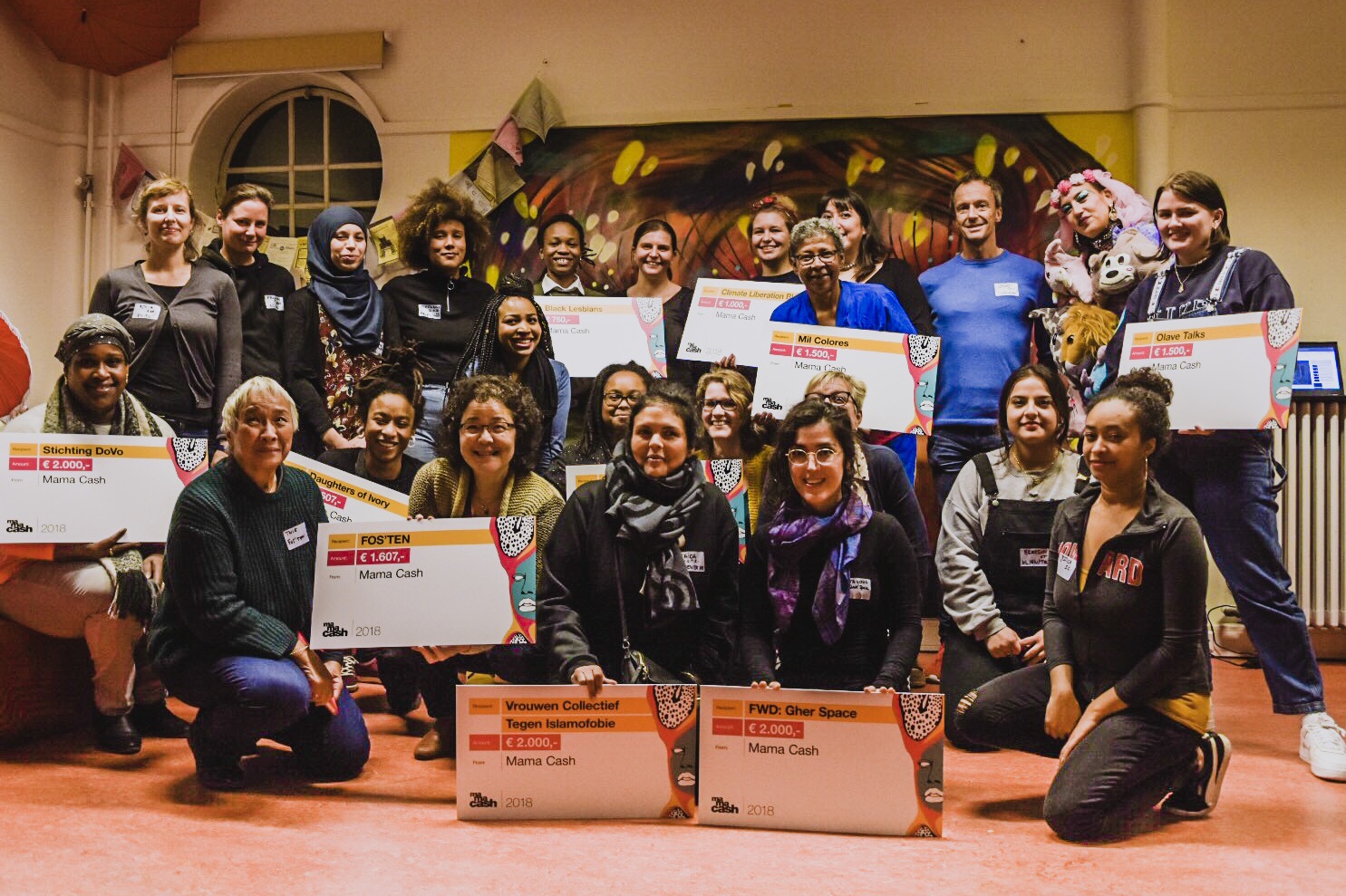 These are the thirteen Spark portfolio grantee-partners for 2018-2019:

Abortion Network Amsterdam
Abortion Network Amsterdam (ANA) is a network that provides support to women who do not have access to safe abortion services. For example, they offer accommodation, assistance with making an appointment at the clinic, translation services, an escort to the clinic and, when possible, loans in order to pay for the appointment.

Black Lesbians
Black Lesbians is a project that aims to increase the representation of the black LGBTQ community in the Netherlands and break the stereotypes, taboos and stigmas regarding black lesbian women in particular. This grant will go towards developing an online platform to provide space for discussing issues relevant to the black lesbian community.

Climate Liberation Bloc
Climate Liberation Bloc was founded in 2017 with the idea of making organized interventions in the current Dutch climate movement - in particular, to introduce and push for a feminist, decolonial and intersectional perspective. From the conviction that nobody lives single issue lives, CLuB aims to restore our relationship to earth and each other by working through difference and strengthening cross-movement collaborations.

FWD: Gher Space
FWD: Gher Space is an Amsterdam-based platform that organizes a space for a growing community for womxn, queer and femme identifying DJs. The platform works with music lovers with investments in diverse musical traditions, as well as with VJs, dancers, and artists with different experiences, cultural backgrounds, and gender identities in divergent projects and venues.

FOS’TEN
FOS’TEN, established in 1997, pools knowledge and experience from 50+ Surinamese women in order to empower older Surinamese women and strengthen their positive self-image. Based on the viewpoint that information plays an important role in emancipation and empowerment, Fos’ten devotes itself to knowledge transfer and the transfer of Surinamese cultural heritage. They also prepare the older generation of migrant women for the future, for example through digital skills trainings.

Man.ish Cave
Man.ish Cave developed out of the desire and need to provide a safe and inclusive space for trans masculine individuals on the FTM spectrum, in particular people of colour and/or refugees. Especially for non-Dutch speakers, adequate support for these groups is lacking, and so Man.ish Cave aims to provide a space where this community can feel free to express their gender identity/expression and sexuality and support one another.

Marokkaanse Vrouwen Vereniging Nederland
The Marokkaanse Vrouwen Vereniging Nederland (Netherlands Association of Moroccan Women, MVVN) was established in 1982 in order to strengthen the social position of Moroccan women. In order to achieve this goal, the MVVN works on the basis of the concrete life experience of women, which are shared during their open office hours. By analysing the problem areas that cause (legal) inequality, the MVVN tries to exert influence on better policy in order to improve the lives and protect the rights of Moroccan women.

Mil Colores
Already active for 18 years, Mil Colores strives for an inclusive society and, in particular, for the equality, visibility and social acceptance for bicultural LBT women. Sometimes in collaboration with other organisations, they organise activities and events for this group, who otherwise receive little recognition in the LGBTQI+ world. At the same time, Mil Colores works to create visibility and acceptance for LBT issues in the bicultural community.

Olave Talks
Olave Talks is a video series (aka vodcast) in which host Olave Basabose interviews critical LGBTQIAP+ thinkers, doers and creators with the aim of highlighting the knowledge production, strategies and tools developed by intersectional queer feminists. Olave Talks both creates an accessible and living archive of the knowledge, insights and perspectives of marginalised voices, and provides a safer space for guests to share and test their ideas as well as key information pertinent to struggles of the communities they represent and serve.

Stichting DoVo
Sitchting DoVo provides services to Antillean women who are or have been jailed in the Netherlands – in particular legal support on a range of issues, such as domestic violence, housing, and education. This grant would support a series of sessions between Dutch politicians and Antillean women in The Hague to discuss their issues and to come to political solutions. Stichting DoVo also aims to train previously incarcerated women to enable them to carry out the organisation´s activities themselves.

Vrouwen Collectief Tegen islamofobie
Vrouwen Collectief Tegen Islamofobie (Women’s Collective Against Islamophobia) is a group that seeks to raise awareness about the position of Muslim women, and to mobilise Muslim women so that they have more backing and support in order to assert their rights. To that end, they want to create a platform in which they foster collaborations and discussions between Muslim women and other allies, for example feminists, anti-racism activists and women’s organisations.