Skip to the page content
Donate now
Search
To the homepage
Mama Cash will use your name and e-mail address to be in touch with you and to provide updates. You can change your mind at any time by clicking the unsubscribe link in the footer of any mail or by contacting us at shesupports@mamacash.org. By clicking the button above you agree that we may process your name and e-mail address in accordance to our Privacy Statement.
Back to overview
September 14, 2017

This piece was adapted by an article by Mounir Samuel, originally published in De Groene Amsterdammer and later in English version on OpenDemocracy. Photo: Mama Cash/Sarah van Brussel. All rights reserved.

Growing militarism, nationalism, and religious extremism are on the rise in more and more countries. Women are among the first to feel the effects. But as violence increases, so too does activism. How is this playing out in different countries? What challenges are feminist activists facing in such a climate? And what creative strategies do they employ to overcome them?

In our research about closing space for civil society, many activists shared their experience and expertise with us. In this interview, the second in a three-part series, leading Dalit organiser Asha Kowtal describes how the patriarchy and caste system intersect.

“We are working in the crosshairs of caste conflict and gender-related violence. There is clearly a link between the two. It’s through women’s bodies that the caste system is perpetuated. Whenever there’s a problem in a rural community, with water or land for example, the dominant caste uses force and revenge against lower-caste women to exert power and pressure. We are always the first and last victims,” Asha Kowtal explains, the 41-year-old general secretary of All India Dalit Mahila Adhikar Manch (AIDMAM). She is fighting on two fronts. As a member of India’s lowest caste, the Dalit, she is on the bottom rung of the social ladder. As a woman she ranks even lower. Around the world there are around 200 million people who are considered Dalit. Most of them live in India, although Dalit live elsewhere in the subcontinent too, and some also live in the West.

Child marriage has been prohibited by law in India since 1929, but in a country of 1.2 billion people, the practice is alive and kicking. Dalit girls are often the victim of forced marriage. “India’s constitution is no match for the deep-rooted customs and discrimination in society. As women, we have to deal with 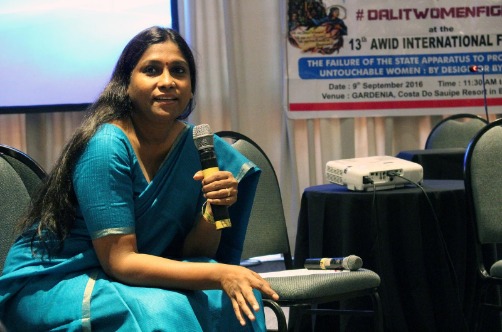 patriarchy and gender-related violence as well as the disadvantage we suffer because of our caste,” Kowtal tells me in a private conference room at Manor Hotel in Amsterdam on a Monday, late in the afternoon. It is Dalit women who are the victim of the massive wave of group rape that has dominated the news from India in recent years. “Dalit women are the most abused and the most silenced,” she explains. “Whenever we talk about sexual violence, or about any lack of rights, we are immediately attacked and put in our place.”

Her organisation operates in five states in Northern India and supports Dalit groups in Pakistan, Nepal, Bangladesh and Sri Lanka. The organisation also offers legal support and training and documents the many human rights violations that Dalit women suffer.

In most cases, the authorities do nothing - or they are active participants in the violence.

"India is the world’s biggest democracy, they say. But the whole idea of India has to be rethought. There are many different Indias in India, all tied together by a single constitution and one dominant caste. This country has been run by the dominant caste as long as anyone can remember: they are the elite, the politicians, the academics, media and business world. So from our perspective we are constantly redefining the idea of nation, state and unity, and looking for new ways to make our voice heard.”

It can be difficult to find allies. “India’s feminist movement was always led by the elitist, urban dominant caste, who were never prepared to make the caste system an issue and never acknowledged our situation since they had too much to lose if the system collapsed. The caste system delivers two things: privilege and pain. We are the people who feel the pain. I have many feminist friends who refuse or are unable to acknowledge that.”

Meanwhile, women are moving into the political arena in India too. With greater numbers at school and university, and more industrious than their male contemporaries, women’s place in politics and society is growing. At the same time, Hindu extremism is on the rise and the country has turned sharply to the right. Nationalism and militarism are growing. And the major companies also have their own interests. None of them feel anything to gain from the emancipation of women or Dalit, or both. “Now right is the new centre, many systematic changes are happening. NGOs receive little or no financial support, freedom of expression is limited, writers and actors are publicly attacked and threatened, students are assaulted at university by rightist student groups, farmers lose land in feuds and confiscations.” Kowtal lists the many problems: impunity, hard-line policing, silencing of dissident voices, limitations on the arts – it’s almost as if she were talking about Egypt.

Feminism in wartime: part one