Skip to the page content
Mama Cash will use your name and e-mail address to be in touch with you and to provide updates. You can change your mind at any time by clicking the unsubscribe link in the footer of any mail or by contacting us at shesupports@mamacash.org. By clicking the button above you agree that we may process your name and e-mail address in accordance to our Privacy Statement.

This piece was adapted by an article by Mounir Samuel, originally published in De Groene Amsterdammer and later in English on OpenDemocracy. Photo: NurPhoto/SIPA USA/PA Images. All rights reserved.

Growing militarism, nationalism, and religious extremism are on the rise in more and more countries. Women are among the first to feel the effects. But as violence increases, so too does activism. How is this playing out in different countries? What challenges are feminist activists facing in such a climate? And what creative strategies do they employ to overcome them?

In our research about closing space for civil society, many feminist activists shared their experience and expertise with us. In this interview, the first in a three-part series, a Russian sex workers’ rights activist speaks about how gender-based violence has become a tool of the state.

“This is a very difficult time. After all the success of the Nineties, much of the territory gained is being lost. Democracy? We’re more concerned about basic safety!” The hard slap on the table is audible. The video flickers slightly. The interpreter in London – third person in our Skype conference call – coughs. Ivanna, calling from her office in St Petersburg, looks directly into the camera. “This is about my children, my grandchildren and their future. We need to stand up and unite to guarantee our safety.”

The Russian activist had only just left hospital where her swollen appendix had been removed. There is little evidence of her condition though. And despite the crackling connection the woman’s strident tone is impressive, even intimidating.

The immediate cause of her passion is the decision of the Russian parliament, the Duma, to largely decriminalise domestic violence. Despite the fact that domestic violence remains an enormous problem in Russia. At least 12,000 people die of such injuries each year in the Russian Federation – and that is a conservative estimate.

“These figures don’t tell the whole story,” says Ivanna. “The media can only use the official statistics, but in my opinion we could multiply those by three, four, five or maybe even nine. Most women are afraid to go to the police when they suffer domestic violence since the state is unable to protect or shelter them. Moreover there’s a psychological barrier to registering a complaint because the victim and perpetrator are a couple; they live together, in a vicious circle in which the victim is practically unable to break out.”

“Why is it in the Russian government’s interest to decriminalise this?” I wonder. 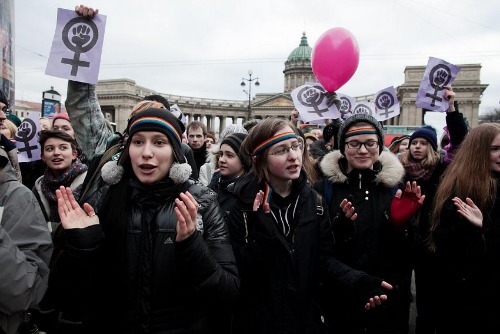 “Ask Vladimir Putin! Those bullies and wife-beaters are his friends in government and parliament. I can’t believe they are even discussing it! By passing this law Russia is disconnecting completely from the civilised world. It is diabolical pure and simple.” (Another fist hits the table). “Those in power know that it’s easier to control the masses if they have no rights. So the change in the law is designed to put women in a position of weakness. The only way it makes sense is that the people in government realise that since their hold power will be short-lived they need to consolidate their position as fast as they can.”

It is the same conclusion feminist activists and scholars have drawn time and time again: violence against women and girls is not personal, it is political.

People who are unable to satisfy their basic need for security (and are psychologically broken) live in constant survival mode and have little opportunity to develop their potential, not to mention democratic ideals.

“The change in the law reminds me of the Nazis who made the women of Leningrad parade naked in the street in the Second World War. This is a Nazi policy,” Ivanna continues pointedly. “Those in power are trying to force us into a corner, but women aren’t the weaker sex. The worldwide movement against women is gathering pace – through government, media and organised religion – in reaction to women rising up in huge numbers and saying: this is my country, my life, and these are my children who I raise in the world. These changes are inescapable, although the resistance is enormous.”

Ivanna’s real name and background are withheld for her protection, but she is happy to introduce herself: “I’m 52. I have two daughters, one is 32 and the other 29, and two grandchildren. I have been married twice and have two MAs. I used to work as a primary school teacher, and later as a sex worker, that was my own free choice.”

As an activist she runs an unusual NGO: an organisation that campaigns for the legalisation of sex work and for the safety, healthcare and economic wellbeing of the three million sex workers in the Russian Federation (women, men and trans people of all colours and origins). Their work ranges from government control and corruption, to organised crime and physical violence and exploitation by clients. And then there’s the healthcare issue. Ivanna reports that in St Petersburg alone between 45,000 and 70,000 sex workers have HIV/AIDS. Few are willing to recognise and tackle this problem.